It's the last few days of 2010, and I wanted to get a few more books in before I call the end of the year. And, so came along the Out With A Bang Read-A-Thon. It's just past the official start time, so here are the books that I have in my line-up. I'm not saying that I will get them all read, but I am going to make a really good try at it. These are all books that I bought myself or checked out from the library. In other words, I wanted to try to clear some of the books on my shelf that can be pushed to the side in my dedication to reading, and posting for, review books. 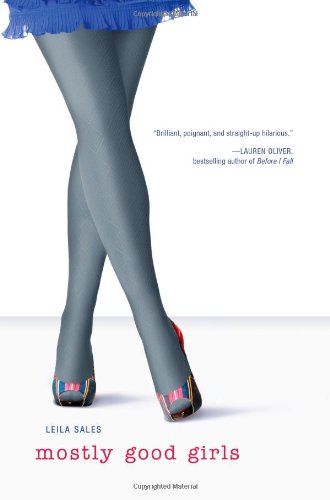 It’s Violet’s junior year at the Westfield School. She thought she’d be focusing on getting straight As, editing the lit mag, and figuring out how to talk to boys without choking on her own saliva. Instead, she’s just trying to hold it together in the face of cutthroat academics, her crush’s new girlfriend, and the sense that things are going irreversibly wrong with her best friend, Katie.

When Katie starts making choices that Violet can’t even begin to fathom, Violet has no idea how to set things right between them. Westfield girls are trained for success—but how can Violet keep her junior year from being one huge, epic failure?

Haunted by the loss of his mother and sister, Han Alister journeys south to begin his schooling at Mystwerk House in Oden’s Ford. But leaving the Fells doesn’t mean danger isn’t far behind. Han is hunted every step of the way by the Bayars, a powerful wizarding family set on reclaiming the amulet Han stole from them. And Mystwerk House has dangers of its own. There, Han meets Crow, a mysterious wizard who agrees to tutor Han in the darker parts of sorcery—but the bargain they make is one Han may regret.

Meanwhile, Princess Raisa ana’Marianna runs from a forced marriage in the Fells, accompanied by her friend Amon and his triple of cadets. Now, the safest place for Raisa is Wein House, the military academy at Oden's Ford. If Raisa can pass as a regular student, Wein House will offer both sanctuary and the education Raisa needs to succeed as the next Gray Wolf queen.

Cat doesn't mind living in the shadow of his sister, Gwendolen, the most promising young witch ever seen on Coven Street. But trouble starts brewing the moment the two orphans are summoned to live in Chrestomanci Castle. Frustrated that the witches of the castle refuse to acknowledge her talents, Gwendolen conjures up a scheme that could throw whole worlds out of whack.

Mira Grant's Newflesh Trilogy opens in an eerie post-apocalyptic world where zombies, pandemics, bloggers, and White House occupant would-be vie for our attention. Twin web reporters Georgia and Shaun Mason are flattered when a presidential candidate invites them to cover his campaign. Before long though, they are engulfed in a story far more serious and infinitely more dangerous.

Ten Ways To Be Adored When Landing A Lord

Since being named “London’s Lord to Land” by a popular ladies’ magazine, Nicholas St. John has been relentlessly pursued by every matrimony-minded female in the ton. So when an opportunity to escape fashionable society presents itself, he eagerly jumps—only to land in the path of the most determined, damnably delicious woman he’s ever met!

The daughter of a titled wastrel, Lady Isabel Townsend has too many secrets and too little money. Though she is used to taking care of herself quite handily, her father’s recent passing has left Isabel at sea and in need of outside help to protect her young brother’s birthright. The sinfully handsome, eminently eligible Lord Nicholas could be the very salvation she seeks.

Justine Jones lived her life as a fearful hypochondriac until she was lured into the web of a mysterious mastermind named Packard, who gifts her with extraordinary mental powers—dooming her to fight Midcity’s shadowy war on paranormal crime in order to find the peace she so desperately craves.

But now serial killers with unheard-of skills are terrorizing the most powerful beings in Midcity, including mastermind Packard and his oldest friend and worst enemy, Midcity’s new mayor, who has the ability to bend matter itself to his will.

As the body count grows, Justine faces a crisis of conscience as she tests the limits of her new powers and faces an impossible choice between two flawed but brilliant men—one on a journey of redemption, the other descending into a pit of moral depravity.

As a criminal profiler, Tara used science and her intuitive skill at Tarot card divination to track down the dangerous and depraved, including the serial killer who left her scarred from head to toe. Since that savage attack, Tara has been a recluse. But now an ancient secret society known as Delphi’s Daughters has asked for her help in locating missing scientist Lowell Magnusson. And Tara, armed with her Tarot deck, her .38, and a stack of misgivings, agrees to try.

Tara immediately senses there is far more at stake than one man’s life. At his government lab in the New Mexico desert, Magnusson had developed groundbreaking technology with terrifying potential. Working alongside the brusque but charismatic agent Harry Li, Tara discovers that Magnusson’s daughter, Cassie, has knowledge that makes her a target too. The more Tara sees into the future, the more there is to fear...
Posted by Lillie (AliseOnLife)

Email ThisBlogThis!Share to TwitterShare to FacebookShare to Pinterest
Labels: Read-a-thon