Today, I pass the spotlight to Virna DePaul, otherwise know as Ava Meyers, the author of the RED HOT COPS series, among other popular romance titles. I asked her if she could speak a little on being an author with published books under multiple romance sub-genres, as well as her overall approach to writing romance. Here's what she had to say:

What Turns You On?
First, thank you to Lillie for having me here on AliseOnLife and for reviewing my novellas (written under my pen name, Ava Meyers). It's always wonderful to chat with other readers and writers—hedonists in the best sense.
Romance readers and writers pursue pleasure through the written word. Contrary to what most people think, however, this pleasure isn't just about romantic or sexual fantasies (although that's certainly part of the fun!); it's about experiencing a myriad of emotions, both good and bad, relieving boredom, wrestling with ghosts, experiencing new places, cultures, and ways of thinking, and opening one's mind to foster tolerance and confidence instead of fear.
Let's face it--most of us lead fairly safe, predictable lives and few of us would really want to change that. But immersed in a book, we get to keep our life and experience countless others, too. This why I like to write and read a variety of genres, anyway.
When I write contemporary romantic suspense, I find I'm initially much more fettered to reality. Generally, I draw upon my experiences as a prosecutor and explore outward, but accuracy and believability are always at the forefront of my mind, even when I'm trying to infuse raised stakes and thrills into the story. When I write paranormal or erotic romance, however, I free my mind to go hog wild. I push things as far as I possibly can, knowing I can rein myself in later. I have to do this eventually because a story isn't going to resonate with a reader unless it has relevancy to her life; this means bringing the fantasy down to a manageable level.
Since I'm a “pantzer” (I write by the seat of my pants), I don't plot the stories differently, but I tend to work on them one-at-a-time, so this makes it easier for me to immerse myself in the story world, be it contemporary or paranormal. The one thing all my stories will have, however, is a journey from darkness/despair to light, and an eventual happy ending. To me, that's a reader's reward for sticking with the characters as they struggle through the plot, making one mistake after another until they finally get it right.
Readers want escape.  They want to be immersed in stories and over-the-top situations, and sucked in by characters.  They also want catharsis--to be brought to this fever pitch of emotion and action and suspense, and then brought gently back to earth feeling rejuvenated, empowered, and hopeful.
Romantic suspense gives readers this experience in a way few would ever encounter in real life. Paranormal and erotic romance is about giving readers this experience on steroids. By creating inhuman or otherwise larger-than-life characters who interact with much more human/ordinary characters, we emphasize humanity and the possibilities of the human spirit for goodness and survival.
In the end, I guess I get turned on by life and, most of all, by books that make me want to live mine.

Virna DePaul is a former criminal prosecutor whose debut mass market paranormal romantic suspense novel, Chosen By Blood (Book 1 in the Para-Ops series), comes out May 3, 2011 by Berkley Books but is available for pre-order now!  In addition, Virna writes contemporary romantic suspense for Silhouette Romantic Suspense and HQN. 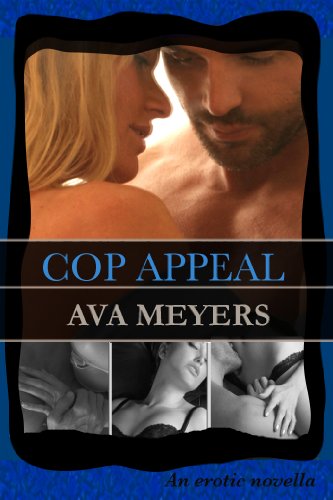 Cop Appeal: People used to call her Sure-Thing-Sarah, but the only thing Sarah Larson’s sure about these days is her continuing desire and love for undercover cop Luke Anderson. Only Luke comes from money, and he’s the most honorable and sexually adventurous man she knows. Four years ago, she committed the biggest mistake of her life--fearing she wasn’t good enough for Luke, she left him to marry another cop. One, it turns out, who’s dangerously possessive.

Now, a year after her divorce is final, Luke is back and ready to show Sarah exactly what she’d been missing all this time. He’ll start by accepting her offer of mind-blowing sex in the event her marriage ever ends. Since Sarah’s a woman of her word, she gives in to Luke’s demands. For two days, she commits herself to pleasuring him and to being pleasured in return.

Eventually, Sarah’s old fears rise up to haunt her, but she’s seen the happiness she adds to Luke’s life. Their physical bond is spectacular, but there’s humor, affection, and tenderness there, too.

Sarah’s determined to give their relationship a chance, but first she must confide one final fear to Luke: That when her ex-husband, the man who’s been stalking her for weeks, learns of Luke’s return, he’ll make sure Sarah’s second chance at happiness is destroyed forever.

Copping To It: Respected journalist Claire Fullerton fantasizes about being a bad girl, but she also fears that revealing her dark fantasies will open her up to being hurt.

When undercover cop Ty Williamson enters her life, the intense passion she feels for him scares her. Even though Claire is tempted to reveal the vixen inside her, she decides to play it safe and walk away, when walking away is the last thing she wants to do. Months later, Claire is captured by a notorious gang of bikers, the Demon Guardians, the same gang Ty has infiltrated.

Ty and his partner, Luke, have managed to earn the trust of the gang they are trying to shut down. When a senior gang member orders Ty to prove his loyalty by having sex with Claire, all he can think about is getting her to safety - until he sees the desire burning in her eyes.

Reunited with the woman he's been unable to forget, Ty becomes determined to bind Claire to him. He'll prove he wants all of her, the good with the bad. In fact, the badder she is, the better they'll be - together.


Thanks to Virna (as Ava) for taking the time to be featured on Read My Mind. As a published author under two names and multiple genres, it's great to get a chance to peek into Virna's writing habits, and how she approaches the process.

I'll be reviewing COP APPEAL and COPPING TO IT on the blog tomorrow. Both are hot reads that I've rated 3 stars and 3.5 stars respectively. Come back on Saturday, to see my completed reviews!
Posted by Lillie (AliseOnLife)