Attention urban fantasy and paranormal romance readers! Have a Nook? A Kindle? Why not try out one of the novels written by H.P. Mallory? Her entire backlist is currently on sale for $.99. Who can beat a deal like that? I've read two of her e-novels, and really enjoyed them. But you have to hurry, because the sale ends on Sunday, May 15th.

Fire Burn and Cauldron Bubble: Life isn’t bad for psychic Jolie Wilkins. True, she doesn’t have a love life to speak of, but she has a cute house in the suburbs of Los Angeles, a cat and a quirky best friend.

Enter Rand Balfour, a sinfully attractive warlock who insists she’s a witch and who just might turn her life upside down. Rand hires her to help him solve a mystery regarding the death of his client who also happens to be a ghost. Jolie not only uncovers the cause of the ghost’s demise but, in the process, she brings him back to life!

Word of Jolie’s incredible ability to bring back the dead spreads like wildfire, putting her at the top of the Underworld’s most wanted list. Consequently, she finds herself at the center of a custody battle between a villainous witch, a dangerous but oh-so-sexy vampire, and her warlock boss, Rand.

Toil and Trouble: After defending herself against fairy magic, Jolie Wilkins wakes to find her world turned upside down—the creatures of the Underworld on the precipice of war.

The Underworld is polarized in a battle of witch against witch, creature against creature, led by the villainous Bella, who would be Queen.

While Jolie has one goal in mind, to stake the vampire, Ryder, who nearly killed her, she also must choose between the affections of her warlock employer, Rand, and the mysteriously sexy vampire, Sinjin.

And as if that weren’t enough to ruin a girl’s day, everything Jolie knows will be turned inside out when she’s thrust into the shock of a lifetime.

To Kill A Warlock: The murder of a dark arts warlock. A shape-shifting, ravenous creature on the loose. A devilishly handsome stranger sent to investigate. Sometimes working law enforcement for the Netherworld is a real bitch.

A Tale of Two Goblins: Dulcie O’Neil is a fairy working in law enforcement for the Netherworld.

When Knight Vander approaches her with a case regarding comatose victims, she agrees to help him, imagining the most difficult part will be combating her attraction to him.

But, what Dulcie isn’t betting on is the fact that the case becomes personal when she learns all the victims are somehow linked to her.

When her best friend falls victim to the Dreamstalker, Dulcie must do everything in her power to ensure her friend’s survival, including associating with criminals and accepting the fact that desperate times do definitely call for desperate measures. 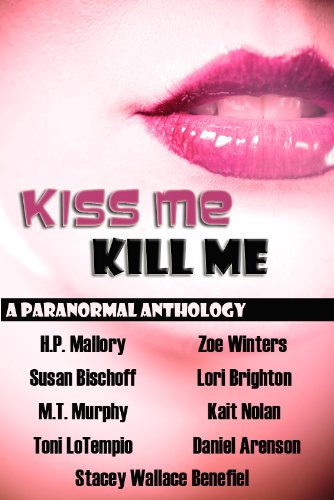 Kiss Me, Kill Me (Anthology including, A GHOULISH VALENTINE): Dulcie O'Neil can't help her attraction to Knight Vander, much though she tries to fight her feelings. When she begrudgingly accepts his invitation to dinner and a movie, she can't imagine her evening will be derailed by a cemetery full of hungry ghouls and one incredibly sexy man.