Golden
Golden-eyed Jin has spent her life preparing to be the Emperor's consort. She knows her destiny is to serve the Emperor by indulging the dark desire that he has buried deep inside his heart—the desire to give pain.

Only she can take the pain he yearns to give, and transform it into the most unimaginable pleasure. But to enjoy all the Emperor can give her, she must survive assassination attempts from those who would keep them apart.

Seducing the Emperor is risky...but it's the only way to fulfill her destiny.
My Good Reads Rating: 4 Stars

The Keepers of Sulbreth
In this magical, medieval fantasy, forces must combine to save the kingdom of Futhark from the evil abyss that threatens it. Sitting within this land and high above an unexplored sea is Sulbreth, the seat from which the Otten family has always ruled. Standing next to their throne are the Keepers, gifted sorcerers who hide a guarded truth only the king understands.

When Prince Jonared takes the throne, he also inherits a tragic and dark shadow ready to befall his land. He and the Keepers summon Sabelline Shelton, a rare sorceress gifted in metallurgy, for a duty she has always feared. But even her exceptional talents are not enough to forestall the soulless enemy issuing forth from the dark places of Futhark.

When Cage Stone enters Sulbreth in a tournament to secure his sister’s future, he too is called by a prophetic destiny to help fight the otherworldly foes and renew the seals that protect their kingdom.
My Good Reads Rating: 4 Stars 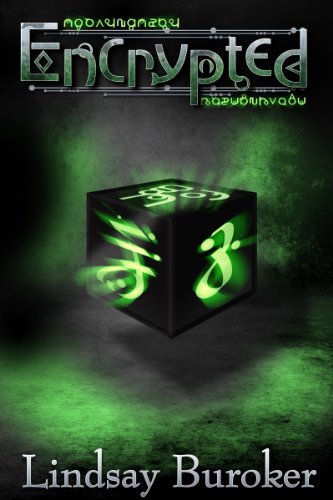 Encrypted
Professor Tikaya Komitopis isn't a great beauty, a fearless warrior, or even someone who can walk and chew chicle at the same time, but her cryptography skills earn her wartime notoriety. When enemy marines show up at her family's plantation, she expects the worst. But they're not there to kill her. They need her to decode mysterious runes, and they ask for help in the manner typical of a conquering empire: they kidnap her, threaten her family, and throw her in the brig of their fastest steamship.

Her only ally is a fellow prisoner who charms her with a passion for academics as great as her own. Together, they must decipher mind-altering alchemical artifacts, deadly poison rockets, and malevolent technological constructs, all while dodging assassination attempts from a rival power determined the expedition should fail. As if Tikaya didn't have troubles enough, her new ally turns out to be exiled fleet admiral, Federias Starcrest, the man who recommended taking over her nation. To trust him could be a mistake; to fall in love with him would be a betrayal to her people, her family, and the fiancé she lost in the war. Those runes cloak more than mysteries, however, and he may be the only one who can help her unravel them before their secrets destroy the world
My Good Reads Rating: 4 Stars

Kelly's focus is the bookstore she manages. Sex is relegated to a list of candidates on her PDA. Only one man pushes all her buttons―her boss.

Spencer is determined to fight his desire for Kelly. For years they’ve bumped heads over the store they both love. But there's more than one reason their getting together is complicated.

When Kelly and Spencer unexpectedly meet up at a sex club, all the rules go out the window. Suddenly there’s only way this match of wills can end―naked, preferably all night long. In this battle for sexual supremacy, there are two winners—and two losers when their stubbornness leads to the very thing each dreads most.

The Claiming Of Suzy
Suzy Bean is a woman who lives in the moment and loves her overabundant curves. The man she secretly loves, JC Mosino, is the only one who can make her untamed sexual fantasies a reality. After having way too much fun during a party, JC drives her home where their passions ignite. Suzy believes this is night she and JC will go from being friends to lovers. Unfortunately things go awry and Suzy ends up throwing JC out.

Now Suzy's whole world has been turned upside down. She's given up smoking and is sexually frustrated when she meets a handsome, flirty stranger, who rubs her the wrong way. This chance meeting is one she'll never forget, for Mr. Hunk is her new boss, Xavier Marks.

JC's craving for Suzy is consuming his thoughts, and he wants nothing more than to work things out and become her lover. He has a plan, but has to move fast as Xavier works to seduce Suzy. JC will do whatever he can to claim his brassy, buxom beauty for his own.
My Good Reads Rating: 4 Stars

The Last Detail
Ten years after she ran away from Earth, Lou Campbell is one job—just one more collar—away from earning enough credits to go home. All she has to do is lure Sam Dawson within range of her handcuffs with the promise of fast, hard sex. Easy.

Once she gets him there, keeping her own hands off him isn’t so easy.

Sam’s committed his share of sins, but he’s not guilty of selling secrets. Before he can convince the sexiest bounty hunter he’s ever seen that he’s been betrayed, all hell breaks loose. And he’s on the run with a false accusation on his hands—and a bleeding woman in his arms.

When Jared Flores walks in on his best hunter and ex-lover in bed together, the surprise is mutual. Worse, the need he has long felt for both of them overrides his better judgment. After the fists fly, the sparks catch fire into a budding three-way romance.

Then Sam disappears, leaving Jared and Lou in a race against time to not only retrieve their lover, but save his life.
My Good Reads Rating: 4 Stars

Hushed
Eighteen-year-old Archer couldn’t protect his best friend, Vivian, from what happened when they were kids, so he’s never stopped trying to protect her from everything else. It doesn’t matter that Vivian only uses him when hopping from one toxic relationship to another—Archer is always there, waiting to be noticed.

Then along comes Evan, the only person who’s ever cared about Archer without a single string attached. The harder he falls for Evan, the more Archer sees Vivian for the manipulative hot-mess she really is.

But Viv has her hooks in deep, and when she finds out about the murders Archer’s committed and his relationship with Evan, she threatens to turn him in if she doesn’t get what she wants… And what she wants is Evan’s death, and for Archer to forfeit his last chance at redemption.
My Good Reads Rating: 4 Stars

Tempt Me
She’s a temptation he can’t resist…

Roxanne ‘Rocki’ Monroe’s life is full of secrets and hidden heartaches. Cole Stanton would love to heal her pain and chase away the ghosts of her past, but she’s just a complication he doesn’t have room for in his life.

Or so he thinks.

It doesn’t take Cole long to realize he’s more than willing to let temptation get the best of him, more than happy to deal with complications if that’s what it takes to get her.

Sweet As Sin
John Murphy is tormented by nightmares. A bestselling young-adult author, he writes the ultimate fantasy: stories where good always triumphs. He knows better. His past has shown him the worst in people—and in himself. When he moves next door to the sexy, vibrant Livvy—a woman completely unlike his usual one-night stands—he's driven to explore every curve of her delicious body.

Pastry chef Livvy knows that giving in to the temptation that is John Murphy won't lead to anything permanent, but she deserves a passionate summer fling. John discovers she's as sweet as the confections she bakes while Livvy slowly unravels his secrets. But what will happen when she uncovers them all?
My Good Reads Rating: 5 Stars

Wilder's Mate
Wilder Harding is a bloodhound, created by the Guild to hunt down and kill vampires on America’s frontier. His enhanced abilities come with a high price: on the full moon, he becomes capable of savagery beyond telling, while the new moon brings a sexual hunger that borders on madness.

Rescuing a weapons inventor from undead kidnappers is just another assignment, though one with an added complication—keeping his hands off the man’s pretty young apprentice, who insists on tagging along.

At odds with polite society, Satira’s only constant has been the aging weapons inventor who treats her like a daughter. She isn’t going to trust Wilder with Nathaniel’s life, not when the Guild might decide the old man isn’t worth saving. Besides, if there’s one thing she’s learned, it’s that brains are more important than brawn.

As the search stretches far longer than Wilder planned, he finds himself fighting against time. If Satira is still at his side when the new moon comes, nothing will stop him from claiming her. Worse, she seems all too willing. If their passion unlocks the beast inside, no one will be safe. Not even the man they’re fighting to save.
My Good Reads Rating: 5 Stars
Posted by Lillie (AliseOnLife)