Say No to SOPA and PIPA 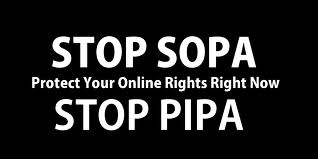 Read My Mind is participating in the blackout to protest SOPA (Stop Online Piracy Act) and PIPA (Protect IP Act) on January 18th, from 8AM-8PM.

Why? Under the laws, the government has the ability to regulate material on the internet in a bid to stop widespread internet piracy.

Doesn't sound so bad? I'm against illegal copyright infringement and piracy BUT these laws give too much power to the government to arbitrarily decide what constitutes infringement.

That Teaser Tuesday or Friday 56 excerpt from a book I post on my blog? Subject to SOPA or PIPA.

That link I made to another blog or site, which may or may not be violating SOPA or PIPA makes ME vulnerable to being shut down.

If you feel the same, please take action here by contacting your congressional representative.


You can see the two posts that I promised as part of a blog tour (posted just after midnight):

But other than that, Read My Mind will be inactive from 8AM-8PM to support the anti-SOPA/anti-PIPA cause.

Thank You.
Posted by Lillie (AliseOnLife)