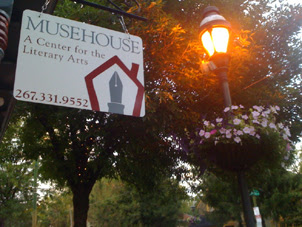 I've been going to as many local signings as I can find lately, but I never seem to get around to doing a proper write up here at Read My Mind. Well, I'm trying to do better, and it starts with the discussion, reading and signing hosted by Musehouse in Philadelphia, PA that I attended on March 17, 2012.

The special guest authors were April Lindner, author of JANE and Beth Kephart, author of DANGEROUS NEIGHBORS, YOU ARE MY ONLY and other works.

Musehouse has resided on Germantown Avenue in Philadelphia's Chestnut Hill area for a about a year and proclaims itself a center for the literary arts. Offering workshops in many other fields of writing, aside from just fiction (poetry, memoir, scriptwriting, and more) it seeks to foster the writing community at large.

I wasn't quite sure what to expect when I walked into Musehouse, but it was a lovely place. With a bookcase painting, an old typewriter on display and scented candles for the occasion, Musehouse did indeed possess a cozy, literary atmosphere. 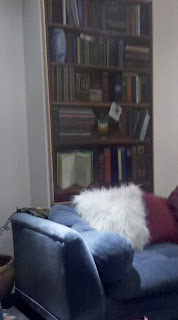 After a brief introduction, April Lindner took the stage first. She read from JANE, her modern adaptation of Jane Eyre, which I rated 4 stars when I read it in 2010. The passage she told dealt with the first meeting of Jane and her Mr. Rochester, superstar rock singer, Nico Rathburn.

Beth Kephart's moving passage from YOU ARE MY ONLY, a novel that has a dual narrative - one mother coping with the disappearance of her child, and one teen coming-of-age in a very restrictive household - showed the beginning of the fragile rebuilding of a woman after an emotional breakdown.

The readings were fantastic, but what I really enjoyed was the discussion Q and A that followed. To break the ice, both authors were asked what made their novels "YA" and what are some of the boundaries, if any, they had to consider to be writing "YA". 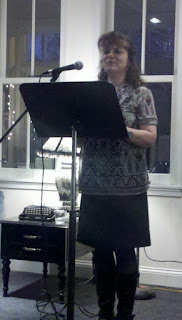 Lindner admitted that she had to tone down some of the sexual content in the original incarnation of JANE for editor and publisher to feel comfortable in the YA category. She also said with a touch of both wit and seriousness that she was told to look to the GOSSIP GIRLS series by Cecily von Ziegesar.

Kephart mentioned the protagonist age as a clearer definition of YA, but both authors admitted that the consideration for YA is very subjective. Kephart added that whatever rules might be established, look at an author like A.S. King, who doesn't tone down the impact of her writing, and THE HUNGER GAMES that included intense content involving children.


I had a chance to ask about their thoughts on much hyped books and the explosion of YA series books from the standpoint of being writers of stand-alone novels. 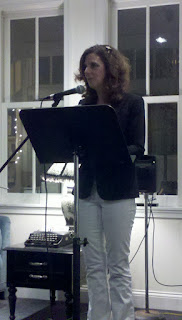 April noted that series books feed readers desire to revisit a world over and over, to discover more about the characters, and just get more.

While Beth agreed that dystopian, and paranormal among some of the sub-genres do tend to necessitate long-term series', she also said that there is demand for stand-alone novels from readers, agents and publishers alike.


The event included a wine, cheese, fruit and dessert table available throughout the night, and concluded with Kephart and Lindner signing a few books. Though it was my first time meeting Lindner, she was such an approachable person. I always enjoy speaking to Kephart, whom I had met on a few other occasions, and who surprisingly remembered me!

The night was enjoyable in many ways, and I'll be keeping an eye out for future events at Musehouse. Are you literary and living in the greater Philadelphia area? Check out Musehouse's website. Also, Beth Kephart documents her daily life at her blog. More than just author talk, Kephart includes photography and personal experiences, minus the ego of self-promotion.
Posted by Lillie (AliseOnLife)