What's better than an unexpected novella release from a favorite author? An unexpected anthology release with novellas from 3 great authors, of course. I had to post on Read My Mind about the latest from Carolyn Crane (Disillusionists series), Meljean Brook (Iron Seas series), and Jessica Sims (Midnight Liaisons series).

For a limited time only FIRE AND FROST is on sale for $.99 Go buy it now! Even if you miss the promotion, at $2.99 regular price, it's still a steal. 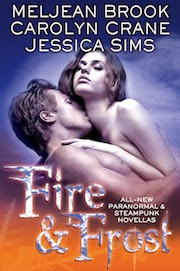 Wrecked by Meljean Brook
Elizabeth has spent the past five years running from her father; her father’s huntsman, Caius, has spent the past five years pursuing her. But when he finally catches up to her on an airship flying above Europe’s zombie-infested cities, Elizabeth discovers that Caius isn’t the only danger she has to fear—and now that he’s found her, Caius doesn’t intend to let her go...

Conjuring Max by Carolyn Crane
The witches of the world ridiculed and rejected nerdy Veronica for trying to use newfangled computers to enhance old world spellcasting. Well, it’s 1984 now, and she’s perfected her spellcasting computer program. Hey, who needs friends when you can conjure virtually anything... or anybody? So when Veronica makes powerful new enemies, she conjures Max, a pitbull of a cop, to deal with the pesky hitmen who keep coming around. But tough-guy Max is in no mood to play lapdog to a gorgeous witch.

Speed Mating by Jessica Sims
Estrella may be going into heat, but she’s determined to remain in control. Just because she’s ovulating doesn’t mean she has to settle for just any man (or his beast). Her sexy alpha’s determined to find her a tiger to take care of her heat and father her child... but no one seems to look quite as good as the man in charge. Will giving in to her need for her alpha ruin her tenuous relationship with her clan or be a match made in heaven?

Email ThisBlogThis!Share to TwitterShare to FacebookShare to Pinterest
Labels: anthology, talking about books