Excerpt from Devil May Care:

She’s one hell of a woman.

Captain watched Eddie as she skillfully carried four longneck beers to a table, her high heels clacking on the concrete floor. Perdition, the club-owned bar, was packed as per usual and she’d been runnin’ all night. She wore a pair of painted-on jeans which hugged the curve of her fine ass and a green sweater that matched her cat-like jade eyes. In her late fifties, with dark brown hair framed by matching streaks of white at her temples, she was still a beautiful woman.

Not to mention sexy as all get out.

Unlike the young, nearly-naked, leather-clad girls around her, Eddie’s appeal was more understated–a mixture of biker chick and Martha Stewart. And much harder to get a handle on, and a man had to work hard to get her to notice.

It made him want to put a ring on it, but he was gettin’ way ahead of himself.

The wild women who hung around the brothers, called hellions, loved to be free and easy with sex. But, what do you expect from biker groupies? As president, Captain had been propositioned so many times he’d lost track, but he never went for it, at least not in their hometown. She wouldn’t give him a second glance if he did.

He knew her all too well.

She’d write his ass off as a man whore and never give him the time of day. Now, that story was a little different when they were out on a run. Captain had needs after all and sometimes he took some cold comfort from a willing woman while on the road. Just biding his time, of course, until he could sweet talk her into going out with him.

Lately, he’d begun to wonder if he’d ever get anywhere with her. Their timing had always been off. When he’d first met her, she’d been married to Joker. Then, the RICO shit royally fucked up the club and she’d remained loyal to her husband while he was behind bars. Captain had forced himself to date and ended up marrying his soon-to-be-ex-wife. Then, after Joker died, she’d been a grief-stricken widow, left with two boys to raise.

But none of it mattered anymore.

The time was finally right. Her youngest son, Ryker, had finally settled down with the town librarian, of all people. Axel had a thriving mechanic business. Captain’s daughter, Lex, had recently started grad school. Hell, the time had been right for a while, but he was finally ready to make a move. 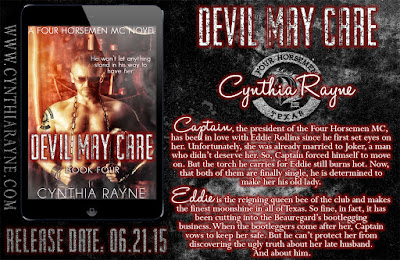 Check out the rest of the Four Horsemen MC Series on Goodreads HERE.