Kat and Stone Bastion’s bestselling first novel No Weddings and the No Weddings series were named Best of 2014 by several romance review blogs.

When not defining love and redemption through scribed words, they enjoy spending their time mountain biking and hiking in the beautiful Sonoran Desert of Arizona.


Excerpt from The Espionage Effect:

When I woke, the remnants of an exhausting dream kept a sticky hold on me. Heavy eyelids prevented me from taking in my surroundings too quickly. After several minutes of opening then shutting my eyes, two slow yawns, and one lazy stretch, awareness of someone else in the room pricked at my senses, and I finally pushed myself upright.

Alec. I inhaled his scent before I spotted his silhouette across the room.

At some point, he’d turned off the bathroom lights, swathing the room in darkness once again. Only a dim blue-white glow that emanated from beside him cast light into the suite.

He sat at the large desk. His features, focused in concentration, were bathed in the soft illumination from a penlight affixed in some way to the top corner of an open laptop. As I couldn’t recall any baggage thrown over the balcony with his unorthodox means of arrival, the laptop had to be Anna’s.

Curious, I pushed off the bed. My bare feet landed toe first onto the cool floor tiles. I padded closer in silence, not wanting to distract him.

“You slept like the dead.” His comment came without inflection of judgment, merely statement of fact. And he didn’t move from his studious position. Nor did he attempt to hide what he was looking at.

My pulse accelerated as I smoothed my hands down the thin cotton tank top and boxer shorts I still wore, my thoughts drifting over the reasons I’d slept so soundly. “I suppose orgasmic endorphins followed by a meal heavy in carbs and fat will do it.”

At that, he swung his gaze my way, arching one of his brows. “Orgasmic endorphins?”

I paused. The toes of my right foot slid just over the edge of the first step that led down to the sitting area. I curled them down over, rooting myself as I swayed under his sudden scrutiny.

Even in the dim light, I could see the heat in his gaze. I certainly felt it, my skin beginning to warm from the second his attention had shifted toward me. “Well, actually, many chemicals accompany orgasm: endorphins, dopamine, testosterone, norepinephrine, serotonin...oxytocin.”

The muscles at one corner of his mouth twitched, tugging his lips into a sinful smirk as his gaze drifted a few inches lower. “That sexy mouth of yours keeps spouting intellectual factoids. I keep wondering what it’ll take to render you speechless.”

A full smile now played at his lips. “Oh, yes. I’m taking it as a personal challenge to blow your mind to the point you cannot describe an event that happens between us with mere words.”

“See. You get the idea. We’ll leave it there for a while.”

Why? To let the anticipation build? Already, my heart rate quickened, my breath shallowed, my…mind analyzing the possibilities of orgasmic chemicals once again.

He turned back toward the desk with an unaffected expression, carefully smoothing his hands over a large, thin paper he’d spread across the surface—as if he hadn’t just dropped a nuclear bomb between us and set the timer for detonation. 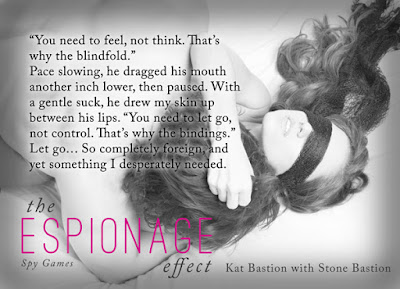 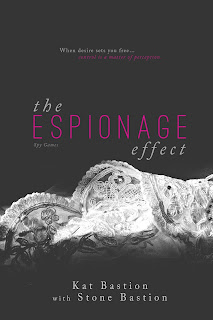 When desire sets you free…control is a matter of perception.

Tested as a genius at age seven, I hide my emotions, become what they expect...bury my secrets. At nineteen, I trudge toward a predestined path, blinders on, heart safeguarded.

Until I dare to be wild.

Until Alec Marquez crashes into my world.

Until all that follows redefines everything I've ever known.

What happens when you stumble into a world of spies...and discover you belong there?