What made her decide to be an erotica author?

How else was she going to parlay her two favorite past times into a career?

Emma is single and loving it. Like her first character, Alysin, Sin for short, she doesn't believe in settling or in settling down. She loves to indulge in her passions whenever the mood strikes and enjoys keeping all of life's cliché moments spicy.

Known for her sense of humor, Emma surrounds herself with friends whose antics often become the source of book fodder. Her ideal situation would be to explore the Caribbean while writing. She pursues that dream daily.

“What’s going on with you, Hannah?” He spoke gently.

Her head dropped. Finally, in exasperation, she mumbled, “I don’t want to talk about it.” Then she looked away.

“Okay,” he said calmly. “Let’s start with an easier question. Where did you go when you left the house today?” Gavin concentrated on maintaining a calm exterior, even if it killed him.

She sighed. “I had to go to a child support hearing.” She stared at him with wide eyes.

It was as though she was willing him to ask the right questions so she could give him the correct answers, the answers he so desperately needed. “So, Amy was with you,” Gavin said. Hannah nodded in response. “All right. I take it the hearing went badly?” He hadn’t had to deal with this aspect of divorce proceedings.

Suddenly, the dam broke and Hannah spewed forth the details of the hearing. “He brought the stripper with him,” she mourned. “I can’t believe he brought her with him!” She set her mug on the railing as she shook from the emotion of it all.

Gavin studied her. Was she still attracted to her ex? Was this why she was so upset? Or, he desperately hoped, was it something else? “Do you still want to be with him?” Truth be told, he had to know.

The look on Hannah’s face said it all. She was revolted, disgusted at the idea. “No,” she said adamantly. “I have no desire to ever be with Brett again.”

Now they were getting somewhere. “Then what’s troubling you so?”

She exhaled slowly for a moment. “I hate having it shoved in my face.” She shook her head. “I hate having to see he’s happy with her in a way he never was with me.” She fixed her expressive eyes on him. “It’s knowing I’m not enough. It’s having my pride continually shattered. It’s the constant blow to my ego. It’s feeling so alone…” Her voice trailed off.

“Is that what you feel?” Gavin asked incredulously. “You feel alone?” He opened his arms and took a step toward her, but she backed away. “Let me be close to you,” he said.

Hannah stared at him like a deer caught in headlights. “I can’t,” she murmured, shaking her head.

He tried a new approach. “Don’t you ever want to be close to someone? No strings? No expectations?”

“But what?” He walked toward her with open arms and watched helplessly as she backed away.

Gavin knew she was out of space. There was no more room for her to back away. He had her pinned against the corner of the railing. Slowly he stepped towards her as if he were trying to tame a wild mare. “I won’t hurt you,” he murmured, reaching for her.

She closed her eyes. “I don’t believe you.”

Gavin wrapped his arms around her and drew her into the warmth of his embrace. He could feel her stiffen at first, unwilling to yield, unwilling to admit defeat. Instead of being discouraged by her reaction, he welcomed the challenge. Ever so gently, he caressed her back and ran his fingers through her hair. Slowly, almost unnoticeably, she began to melt into him. “What do you have to lose?”

She murmured something against his chest. He could’ve sworn he heard her say, “My heart.” Something inside him shattered. Gradually her emotions broke and the tears, which had remained unspent for so long, sought release. He wiped and kissed them away.

“Let me hold you tonight,” he murmured against her temple. He could feel her begin to stiffen again. “We won’t go to bed. We’ll just build a fire and lay out here under the stars all night long.” He hadn’t really thought this through. The old Gavin would’ve checked the weather report to ensure the temperature wouldn’t drop too low, and there was zero chance of rain overnight. This new Gavin cared only about making Hannah happy at any cost. 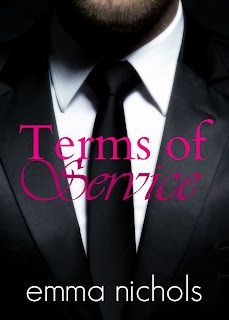 For six months, Hannah Matthews has held it together as best she can for her twin girls. On Labor Day, she returned from their vacation only to discover her husband had cleaned out the apartment and bank account, but left the bills. Over-educated and under-employed, her lease has increased, her income hasn’t, and she's forced to seek an unconventional living situation.

Affluent businessman Gavin Meyers is looking for someone to punish since his divorce has left him bitter and wounded. When his lawyer suggests he find a hobby, he can only think of one: revenge. When he spots a personal ad for a sugar daddy, he knows this woman will suffice.

Keeping it perfectly legal, he has a lawyer draft a contract, the Terms of Service for their new life together. It seems cut and dried, but love, lust, and revenge are complications that defy every perfect plan. 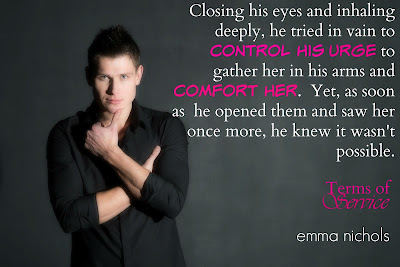