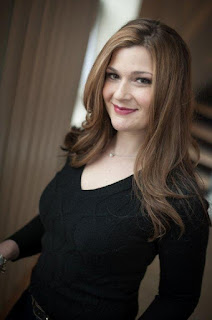 Chloe is a contemporary romance novelist living in Pittsburgh, Pennsylvania with her husband and their sweet dog. This Amazon Top 100 Bestselling Author, has been featured in Heroes and Heartbreakers, Pittsburgh Post Gazette, Pittsburgh Tribune Review, RT Book Reviews Magazine, Lupus Now, and Mt. Lebanon Magazine. She is a native Washingtonian who graduated Duke University with a degree in English and Chinese. She met her husband at Duke and he brought her to Pittsburgh over a decade ago, which is now her adopted hometown. She also attended the University of Pittsburgh Law School where she continued to be a book-loving nerd.

Chloe cherishes the opportunity to craft her fictional novels and share them with the world. When not writing, Chloe spends her time exploring Pittsburgh. She also enjoys yoga, jogging, and all Pittsburgh sports, as well as her Duke Blue Devils.

She also thoroughly enjoys every opportunity to communicate with her readers. Since the release of her debut novel, Three Rivers, she has enjoyed the honor of meeting and talking with numerous fans, and looks forward to getting to know many more.

Althea leaned back and forced a smile and laugh as she looked around. Her brazen pretense was tossing kerosene on Griffen's fiery emotions.

With each nervous dart of her eyes, Griffen's heart pounded with more anger. He leaned closer and whispered hotly in her ear, "Is that better? Am I making you uncomfortable? God forbid someone thinks you aren't a perfect widow pining away alone after all these years. That you're still living an adult life," he growled. "Maybe I should ignore your rules and touch you anyway. I know you like it when I do."

"Stop it, please." She breathed slowly, calming herself. "We can touch. Just not here."

"Fine. I get it." Griffen couldn't stop how angry he felt.

The irony wasn't lost on him. Most women he'd been with begged him to be serious with them and tell the world they were together. That had never appealed to him, until now. Yet here was this beautiful, desirable woman that he wanted to express affection to and she couldn't bear to let anyone know they were together. He hadn't even realized how furious it made him until he found his heart was racing and he was feeling hot with anger.

Althea must've sensed it because she leaned over and whispered, "No. You don't get it, and you shouldn't have to. This is my thing. My issue." She looked around to see if anyone was staring at them and looked into his eyes. "I do want to touch you. I want you to touch me." She swallowed and lowered her voice even more. "Very much."

"Fine," he gritted out. When he looked down at her, with her eyes turned up so full of concern while her lips parted and she panted just a little from the desire that coursed through them every time they were near each other, his heart pounded for a different reason. "I need to touch you, too...everywhere." 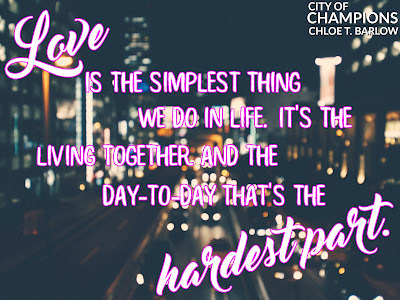 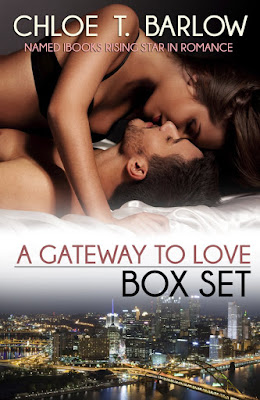 Experience the first three installments of the critically acclaimed Gateway to Love series, which takes you on a twisting and turning roller coaster ride of romance and suspense from Pittsburgh, to New York, and Shanghai, all in one sitting!

Like the succession of rings from a stone hurled into a pond, one cataclysmic moment can send unseen ripples of change throughout many lifetimes -- the effects of which can be both unknown, and seductive. When Althea Taylor became a widow at twenty-four, she could never have predicted how many lives the mysterious death of her husband, Jack Taylor, would eventually change forever.

In her Gateway to Love series, Chloe Barlow tells the sexy and emotional tales of the many lives, and loves, inexorably connected to this tragic, and suspicious loss. Each story is a fully contained standalone, with no cliffhangers. Yet, secrets and thrills imbue each page, continuing into the next story in a way, which has kept readers around the world eager for each upcoming installment.


In Three Rivers we meet Althea and her best friends, Jenna and Aubrey, who encourage her to take a baby step toward a new life beyond grief, if only for one night, with an irresistible stranger. Griffen Tate certainly fit that bill, but he is not who he seems. In fact, he is so much more; as are the many secrets he keeps.


Next, in City of Champions, orthopedic surgeon Dr. Jenna Sutherland fights to resist injured NFL quarterback, Wyatt McCoy, a man who's willing to do anything to stay on the field. Can their torrid secret holiday affair make it through to the New Year, and overcome hidden threats at every turn?


And in Shanghai Wind, the most suspenseful installment yet, we meet Feng and Colin. These two fell hard for each other when Colin was an eighteen-year-old bad boy forced to stay with Feng's family in Shanghai. Yet, Colin would go on to break every promise he ever made to her. These high stakes aren't just for their hearts -- it could be for their lives.