Something big was going on and with every passing day, the air of tension and alertness around him grew. Even now, in the middle of a family picnic, I noticed more nomads were visiting us than usual, and they were all watching the property like a bunch of unchained, territorial pit bulls. These guys, for various reasons, didn’t belong to any particular club, but they were still part of Iron Horse. They roamed the land, going where they were needed, and usually fucking someone’s shit up royally while they were there. For sure they were a different breed of biker, the kind that didn’t like to form attachments to anything or anyone, but they loved their president.

I just didn’t know why they were here. Yeah, they all came to visit ’cause we were the national chapterhouse, like bees returning to the hive, but so many of them at once, clearly on alert, sent my Spidey sense tingling. We weren’t in danger quite yet, but the potential hung in the air, gathering around the men like a deepening gloom. Not saying I can see auras like my friend Indigo can, but I felt bad shit coming over the horizon, and couldn’t figure out what form that danger would come in.

Beach carried the burden of the entire MC on his broad and capable shoulders, and he’d pulled away from me a little bit over the past weeks. Nothing major, but enough that I knew he was getting trapped in his own head. If he didn’t give his mind at least a little bit of rest he was going to break, and there was no way in hell I was going to let the happen I’d grown used to my loving, attentive man over the past ten months and I hated seeing him stressed out like this. The only way I could seem to reach him was physically, and if that’s what it took then I had no qualms about seducing my man. It was only after a good round of rough sex that he would calm down enough to untie me and make love to me. If he was feeling particularly feisty that night, he might make me sleep next to him with our wrists bound together by sheep-skin-lined cuffs. Most women would balk at that, but I understood his need to make sure I was safe by his side even in sleep, that I wouldn’t be taken from him when he was most vulnerable. It was kind of sweet in a slightly stalker-esque way.

~Author's Note-Exquisite Karma is part 2 of Beach and Sarah's story. Part 1, Exquisite Redemption, should be read first for the most enjoyment.~

Grab a glass of wine and heat up the chilly spring evening with EXQUISITE KARMA by Ann Mayburn, part 2 of Sarah & Beach’s story! 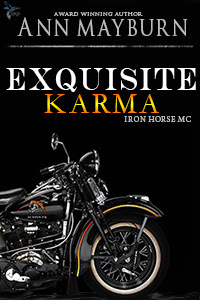 Sarah
Life as the old lady of Carlos 'Beach' Rodriguez, National President of the Iron Horse MC, was everything I never knew I wanted. Not only did I have a good man who treated me like a queen and loved me like crazy, I also had a vast-extended family of rough and tumble bikers who accepted and welcomed me into their world without judgement. Unfortunately, good things don't last for a girl like me and just when I finally felt like I'd found my happily ever after my psychopath of a mother had to show up and destroy it. She betrayed me, betrayed the club, and put everyone I've ever loved in mortal danger. Our only chance of surviving this is for me to find her and recover the weapons that Iron Horse was moving for the Russian and Israeli mafia that she helped steal. I can only hope that Beach can forgive me for her sins.

Beach
I should have known Sarah would never betray me, would never work with her junkie mom to steal from the club, but I let my temper run my mouth and now my woman's gone. Normally I'd go after her, but the Russian and Israeli mafias want their merchandise back and if we don't find it they'll wipe us off the face of the earth. To make matters worse, there are traitors in the Iron Horse MC that are feeding our every move to our enemies, kidnapping our women and children, and killing our men. I have to stay here in Austin and try to save our people while Sarah is out there, somewhere, alone, hunting down some of the most dangerous men in the world. I can only pray that God takes mercy on my wicked soul and protects my baby girl from those seeking to cash in on the massive bounty on her head before I can find her. 'Cause if they find her first death would be a mercy compared to the nightmare her life will become.


Check out the rest of the Iron Horse MC series on Goodreads HERE. 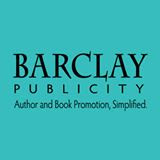