Alexa Riley is two sassy friends who got together and wrote some dirty books. They are both married moms of two who love football, donuts, and obsessed book heroes.

They specialize in insta-love, over-the-top, sweet, and cheesy love stories that don’t take all year to read. If you want something SAFE, short, and always with a happily ever after, then Alexa Riley is for you!


Excerpt from Letting Her Lead:

Sitting on the end of the bed in the dark, I rub my eyes, trying to relieve a little bit of the tension. Even after my shower, I still feel the day coating me. At least I have the next few days off from the clinic. Maybe I can finally catch up on some sleep.

Sadly, I was actually relieved when I got the call from the police department to tell me my brother was in jail. He won’t be out until he sees the judge, and there’s nothing I can do for him until that point. That takes things out of my hands, and I don’t have to decide if I’m willing to fork over the money to bail him out. Again. Who am I kidding? I know I would.

No matter how hard I try, I can’t seem to keep my brother out of trouble. He has a way of falling into it, and I know for a fact he’s mixed up with a motorcycle gang now. It’s something I know nothing about. I spend my days working and my nights with my nose stuck in a book. Or raiding with my guild. My brother and I couldn’t be more different. How we both shared a womb at one time, I have no idea.

We’re twins, but while I went to college, made perfect grades, and wanted nothing to do sex, parties, and drugs, that’s all Dusty seems to do. I don’t even know what he does for a living, but he always appears to have a ton of cash just as quick as he seems to be broke. My guess would be drugs. He’d put our grandma who raised us through hell until she took her last breath.

Pulling the covers back on the bed, I start to crawl under when I hear a noise coming from the front of the house. I reach for my phone on the night stand and come up empty. Shit. I left it in the living room along with my laptop. Double shit.

I wait another second, just to be sure I’m not freaking out, but then I hear another sound.

I open the bedside drawer and pull out my grandfather’s revolver. I’ve been keeping it in the drawer since my brother moved back home. It’s not that I was scared of him. No, I was scared of who he hung around with. I’d come home early one night to find him and three other men in the living room, and after that, I wasn’t taking any chances.

The feelings they gave me made my blood run cold. Dusty pulled me aside and scolded me for coming home early and interrupting him in whatever it was he was doing. I had to call before I came home to my own house? This house was equally ours. It was left to both of us by our grandma, but he hadn’t lived here for years. Until recently. As much as it pissed me off that he expected me to call if I was coming home early, I did after that because I didn’t have the urge to run into his friends ever again.

I don’t know crap about motorcycle gangs, but what I do know, I want no part of. I’ll stick to my Warcraft guilds and gamebattle friends. I’ve never met any of them personally, but I highly doubt they look like my brother’s friends.

Slowly opening my bedroom door, I listen for another sound. This time, there’s nothing. Maybe it was the wind, I think to myself, waiting for a few minutes, still not hearing anything. The alarm would have gone off, I keep telling myself.

I creep down the hall and almost make it almost to the living room when a sound draws my eyes to the dining room. Without thinking, I scream and pull the trigger. The bang goes off louder than I thought possible, the recoil making my arm kick back, and I drop the gun.

“Fucking shit shit shit!” I hear a woman’s voice exclaim before I’m crushed to the ground by a body so big it feels like a giant concrete boulder landed on me and knocked the air out of my lungs.

The room floods with light, and I stare up at the scariest face I’ve ever seen. Scars run down his face in angry lines. His hard blue eyes look deadly. I push against him, and he actually yields to my efforts, but he takes me with him as he stands, grabbing me by my arm in a firm, unbreakable hold. 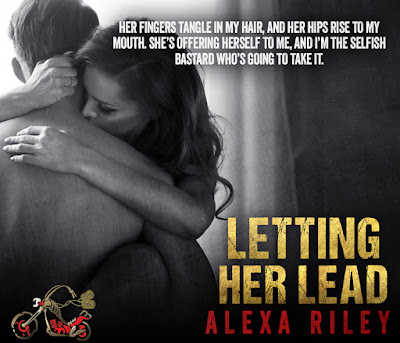 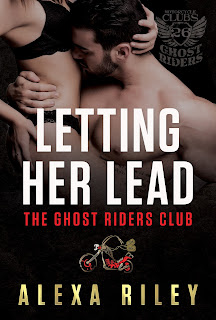 Lucias Houston is president of the Ghost Riders MC. He carries the club on this shoulders with nothing but his brothers on his mind. Until he lays eyes on her.

Elizabeth “Izzy” Force is a veterinarian who spends her time either working, or gaming online. Her life is simple and she likes it just fine…until a baby bulldog pulls in the hottest-looking beast of a man she’s ever seen. They come from two very different worlds, but they’re about to collide. Can Lucias convince Izzy he’s worth the risk?


Warning: This is an MC book like no other. There’s no cheating, no sweet butts, and it has all the sweet, cheesy goodness Alexa Riley stirs up. Saddle up and ride!