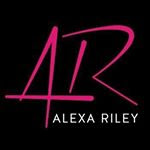 Alexa Riley is two sassy friends who got together and wrote some dirty books. They are both married moms of two who love football, donuts, and obsessed book heroes.

They specialize in insta-love, over-the-top, sweet, and cheesy love stories that don’t take all year to read. If you want something SAFE, short, and always with a happily ever after, then Alexa Riley is for you!


Excerpt from Riding Him:

I pull myself from the truck as Cas pulls up next to me. I follow her in and see only Scribe and Savage sitting in the main area where everyone normally hangs. Savage is sitting on one of the sofas looking every bit of his name, taking up most of the thing with his massive bulk. He has a hard look on his face like he doesn’t really want to be here. Scribe is sitting in one of the stools at the old wooden bar with his computer open next to him.

His eyes come straight to me when he hears us enter. Then he shakes his head. I don’t know how the fuck he beat us here. I figured he’d still be in the back of the bar with the blonde. I inwardly smirk that his time got cut short because of the meeting being called.

“Don’t start,” Cas barks, a slash of heat behind her words. I guess she knows too that Scribe doesn’t like the idea of my being around.

“She’s not ready.” His eyes run over me. I never seem to get the funny, flirty Scribe everyone talks about. I only ever get distaste. We all know why we’re here. I know they’ve been talking about me coming into the Ghost Riders, and today is the day I find out if I’m in. If I get a shot.

I try not to flinch at his words, keeping my face impassive. I don’t want him thinking he bothers me one bit. He’s just like the boy on the playground when you’re a kid. If they know they get to you, they’ll keep doing it. You just have to ignore them. Or just punch them in the face. That trick worked, too. I have a feeling I’ll be doing that one soon. “

You questioning my judgment?” I hear Cas say from behind me as I make my way towards Scribe. His eyes stay on me, giving me a look I can’t quite make out. Good, you should keep looking at me, because I’m the one coming for you.

“She’s going to get herself hurt. Maybe even killed.” His eyes shoot over my shoulder at Cas, then back to me as my feet eat up the distance between us.

“We aren’t going to let anyone near her. She’ll be miles out from danger.” Cas is standing hard behind my being here.

“Doesn’t matter,” I say, sliding up next to him, taking the stool next to his and turning to face him. His musky sweet scent hits me, and I didn’t know a man could smell like both at the same time, but he does. “I don’t need to be miles away. I can handle myself right here,” I tell him, looking him dead in the eyes. “You don’t know me.” My words are flat, brooking no argument. It’s nice to be farther away from your target, but I learned at a younger age that isn’t always the case. Sometimes you have to be close. Sometimes life just gives you the option and you have to learn how to protect yourself in that moment, and I have.

“I know a lot more than you think.” He glances at his computer, then back at me. “In fact, I feel like I know almost everything.” A small smirk plays at his lips, and I wonder if that’s a trace of the flirting I’ve heard so much about. Does he think I’ll turn into some blushing girl in front of him and bat my eyelashes? Not happening. Not for him. Never for a man who doesn’t think I belong. I may not know shit about men in this area, but I know how the men in my life treat their women, and I want that.

“That so?” I scoot a little closer to him, wanting him to know I don’t care what he thinks. That he has no effect on me, even if that’s a total lie. I want him to know that I’m here and I’ll be all up in his fucking space and this place whether he likes it or not. “Just because you went through my life with your computer doesn’t mean you know shit.”

“I beg to differ.” He leans a little in himself. “You finished college in under three years, spending hours up late writing your papers and studying, that when you can’t sleep you read Harry Potter, and you like to scroll JJ Watt’s Twitter a little too much.” He says the last part with gritted teeth. “You’re too young to be here.” 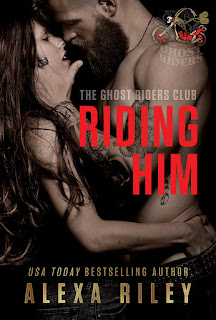 Knox “Scribe” Robertson has been with the Ghost Riders MC since the beginning. He’s the club hacker, and there’s nothing he can’t do… except make Violet Cassano notice him. The little thing is trying to patch in, and suddenly all his protective instincts push forward. He can’t let her become a member of the club without putting her in harm's way.

Violet has been different since that dark day in her past, but the Ghost Riders are exactly what she needs. If only the hot, tattooed, bearded piece of meat Knox would get out of her way. She’s got enough sass and skills with knives to keep him at a distance, but soon she doesn’t want to.

When the two of them are paired up for a job out of town, they’ll be left on their own in the middle of nowhere. Being stuck inside a tiny tent, with no one to hear them… I wonder what could possibly happen? *cue dirty 70s music*

The Ghost Riders are at it again in this final chapter to the series. See how the club hacker finds his happily ever after, and what Violet does to keep it that way. Spoiler alert… It’s dirty stuff.


Check out the rest of the Ghost Riders MC Series on Goodreads HERE.