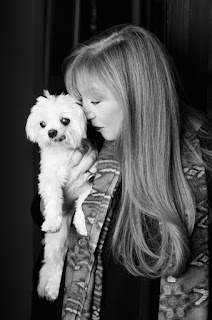 New York Times Bestseller, M.J. Rose grew up in New York City mostly in the labyrinthine galleries of the Metropolitan Museum, the dark tunnels and lush gardens of Central Park and reading her mother's favorite books before she was allowed. She believes mystery and magic are all around us but we are too often too busy to notice... books that exaggerate mystery and magic draw attention to it and remind us to look for it and revel in it.

Rose's work has appeared in many magazines including Oprah Magazine and she has been featured in the New York Times, Newsweek, WSJ, Time, USA Today and on the Today Show, and NPR radio. Rose graduated from Syracuse University, spent the '80s in advertising, has a commercial in the Museum of Modern Art in NYC and since 2005 has run the first marketing company for authors - Authorbuzz.com

The television series PAST LIFE, was based on Rose's novels in the Reincarnationist series. She is one of the founding board members of International Thriller Writers and currently serves, with Lee Child, as the organization's co-president.

Rose lives in CT with her husband the musician and composer, Doug Scofield, and their very spoiled and often photographed dog, Winka.


Excerpt from The Secret Language of Stones:

The war had stolen all our dreams. Women who were supposed to have had houses full of children, would probably remain childless; men who otherwise might have made their fortunes, were now dead in the trenches. Even if I was brave enough to go searching for love, my chances of finding it were slim.

“I went to Le Figaro,” I said out loud. “I met a receptionist who has quite a crush on you.” A moment passed in silence. Just about to be convinced yet again that, yes, I’d imagined it all, I felt an almost breeze blow through my room. There should be nothing suspect about a breeze. Except it was impossible. There were no windows here. Yet it brushed my face, ruffled my hair. The very air moved. I smelled limes mixed with…I sniffed again…mixed with verbena and a hint of myrrh.

“Now that we’ve met, I wanted to read your columns. Who did you write them to?”

At the time I didn’t know. Now I think maybe, I wrote them for you.

I think we were supposed to meet but I messed that up.

It’s all my fault, I misread the signs, I delayed issuing orders…

The words ceased. Silence. And then I heard what sounded like a sob.

“Jean Luc, what do you mean about us meeting? About messing that up.”

I think if I hadn’t made those mistakes in the field I would have come back to Paris and visited your store and looked at the jewelry and seen something to buy for my mother and would have met you.

I put my hand up to the talisman to touch it. To touch him?

Yes. Me too. For you. For so many many things.

I didn’t say anything.

He could see me? “How did you know I was crying? So you really can see me? Where are you?” I was so frustrated and confused.

Until you started to make the talisman I was asleep, floating…and then the closer you came to completing it, the more aware I became. When you touch it, you come into focus. Through fog. As if there is certain distance between us. Yet more clearly than makes any sense, considering I am a world away from you.

“I don’t understand,” I whispered. “And I am a little afraid.”

And then, I felt, or I thought I felt…no…I did feel his hand brushing my hair off my forehead.

I don’t want to make you afraid.

His touch made me shiver and begin to tremble.

I can’t bear for you to be afraid of me. You, here, it’s the only time since…since it happened I don’t feel as lost.

I tried desperately to quell the shaking. Pressure increased against the spot he’d cleared. Not lips, no. But a force suggesting lips. Perhaps from the shock, my shaking stopped.

When I kissed you just now, you felt it, didn’t you?

And now, do you feel this?

Somehow he’d taken my hand. I looked down and saw nothing but my own hand in my lap. I didn’t feel flesh. Instead, it was as if I was holding smoke.

And where our hands met, my skin warmed to his touch.

It takes an effort to be here. So much effort. Have to…learn how to…

He continued speaking, but from an even greater distance. His voice fading.

And then, my tears came. As if I’d known him for years and just found out he’d died. I glanced down at my hand again. It looked no different from before and yet was cold. I touched my right hand with my left. Trying to find where his amorphous fingers had lain, trying to pick up a sense of him. But there was nothing there.

Daughter of La Lune Pendant
We're celebrating the release of THE SECRET LANGUAGE OF STONES by giving away a beautiful Daughter of La Lune pendant. Designed by Cadsawan Jewelry, the silver pendant contains a labradorite, a magical stone excellent for awakening one's own awareness of inner spirit, intuition, and psychic abilities. 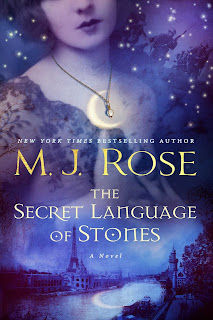 As World War I rages and the Romanov dynasty reaches its sudden, brutal end, a young jewelry maker discovers love, passion, and her own healing powers in this rich and romantic ghost story, the perfect follow-up to M.J. Rose’s “brilliantly crafted” (Providence Journal) novel The Witch of Painted Sorrows.

Nestled within Paris’s historic Palais Royal is a jewelry store unlike any other. La Fantasie Russie is owned by Pavel Orloff, protégé to the famous Faberge, and is known by the city’s fashion elite as the place to find the rarest of gemstones and the most unique designs. But war has transformed Paris from a city of style and romance to a place of fear and mourning. In the summer of 1918, places where lovers used to walk, widows now wander alone.

So it is from La Fantasie Russie’s workshop that young, ambitious Opaline Duplessi now spends her time making trench watches for soldiers at the front, as well as mourning jewelry for the mothers, wives, and lovers of those who have fallen. People say that Opaline’s creations are magical. But magic is a word Opaline would rather not use. The concept is too closely associated with her mother Sandrine, who practices the dark arts passed down from their ancestor La Lune, one of sixteenth century Paris’s most famous courtesans.

But Opaline does have a rare gift even she can’t deny, a form of lithomancy that allows her to translate the energy emanating from stones. Certain gemstones, combined with a personal item, such as a lock of hair, enable her to receive messages from beyond the grave. In her mind, she is no mystic, but merely a messenger, giving voice to soldiers who died before they were able to properly express themselves to loved ones. Until one day, one of these fallen soldiers communicates a message—directly to her.

So begins a dangerous journey that will take Opaline into the darkest corners of wartime Paris and across the English Channel, where the exiled Romanov dowager empress is waiting to discover the fate of her family. Full of romance, seduction, and a love so powerful it reaches beyond the grave, The Secret Language of Stones is yet another “spellbindingly haunting” (Suspense magazine), “entrancing read that will long be savored” (Library Journal, starred review).

"An exciting mix of adventure, intrigue, and romance in this thrilling historical tale."
(Booklist)

“Haunting, spellbinding, captivating; Rose's story of the power of love and redemption is masterful. More than a romance or ghost story, this is a tale of a young woman learning to embrace her unique qualities...So carefully crafted and beautifully written, readers will believe in the magical possibilities of love transcending time.”
(RT Magazine (Top Pick))

“Rose follows up The Witch of Painted Sorrows (2015) with Sandrine’s daughter’s story, set against the tragic yet exquisite canvases of Paris, the Great War, and the Russian Revolution, and offers fascinating historical tidbits in the midst of bright, imaginative storytelling and complex, supernatural worldbuilding. A compelling, heart-wrenching, creative, and intricate read.”
(Kirkus Reviews)


Check out the rest of The Daughters of La Lune series on Goodreads HERE. 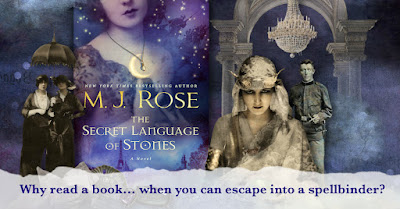