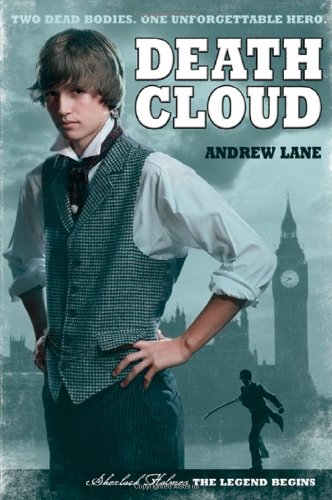 From Good Reads:
It is the summer of 1868, and Sherlock Holmes is fourteen. On break from boarding school, he is staying with eccentric strangers—his uncle and aunt—in their vast house in Hampshire. When two local people die from symptoms that resemble the plague, Holmes begins to investigate what really killed them, helped by his new tutor, an American named Amyus Crowe. So begins Sherlock’s true education in detection, as he discovers the dastardly crimes of a brilliantly sinister villain of exquisitely malign intent.


My Review:
There's something about a really good mystery that always grabs my attention, and DEATH CLOUD had me from the mysterious "cloud" of black smoke in the first few pages. It doesn't hurt that I am a total pushover for British literature, especially historical. Andrew Lane has written the first book in a series, that is endorsed by the estate of Sir Arthur Conan Doyle, so right away I had high expectations.

Lane has re-written and re-imagined the younger life of Sherlock Holmes. Here, the venerable detective is just a young teen, who finds himself in a rather hostile environment. His father isn't around, and Mycroft, his brother, must conduct his business in London. Therefore, Sherlock must spend his school break in the country.

DEATH CLOUD follows the classic story-styling of a Doyle Sherlock Holmes tale. There's a mystery that sparks Holmes' interest, and in the absence of Watson, he teams up with a local boy, to puzzle out the mystery. Though the outcome is not in doubt - Sherlock will obviously be caught in some tight situations, possibly at the brink of death, and then pull a clever solution from nowhere, while utilizing his skills in deduction and observation - the plot held my interest, and the book is very well-written. Mystery lovers, especially those that enjoyed the original Sherlock books, will surely find DEATH CLOUD entertaining.