So, I was going through my reader one day a while ago, when I caught a post from Erika at Moonlight Book Reviews. She had this awesome idea to pack a bunch of books into a box, and send it off to someone. They could choose as many books from the box to keep. BUT the catch was, that the person had to put the same amount of books back in. Sort of like a hand of Rummy, there always needed to be a set number of books in the box. The books could be YA or adult, and from any genre, as long as they were in good condition. Then, the box would get sent off to the next person in the queue. And, each participant would then post about their Book Box experience.

This was how Erika created the Travelling Book Box.

My turn came last week, and let me say, I was really impressed by the diversity of books in there. I can't divulge the entire contents of the box; each recipient should be surprised by what is there. However, I am posting about the books that I took out, and in turn, put in.

Here's what I decided to keep:

13 TO LIFE has been on my TBR for way too long. I've really wanted to read the first book in the series, especially after meeting Shannon Delaney in 2010. When I saw that someone had put SECRETS AND SHADOWS, the next book in the 13 TO LIFE saga, it was the first book that I grabbed. Now, I can read the two together!

VILLETTE is pretty much the only of the Bronte sisters' novels that I have not read. Yay for whoever put a classic in the box! I pulled this book out, hoping that when I have some time, and am itching for a classic read, I'll see if I like it as much as other Brontes' like Jane Eyre, The Tenant of Wildfell Hall, and Wuthering Heights.

ALONG THE RIVER has a great cover! I am always looking for books from non-traditional points of view, and books that explore other cultures. When I saw that this was a Chinese Cinderella story, I knew that I had to try it out.

Finally, I've heard of the BEAUTIFUL DEAD series, but haven't really considered buying or reading. However, I thought that pulling this one out of the Book Box would be a good opportunity to possibly read something that hadn't been on my radar, or recommended to me. Nothing to lose with this chance.

And, here are the books that I put back in: 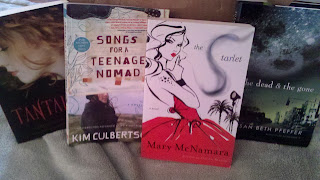 Thanks Erika, for such a fantastic idea. And, also thanks to Sparkling Reviews, who had the box before me. I found a couple of delicious homemade treats in the box when it arrived!
Posted by Lillie (AliseOnLife)