Read My Mind welcomes e-author Lindsay Buroker to the blog today! I recently read her book, ENCRYPTED, and loved it. See my 4.5 star review here.

This is a fabulous read for adventure, science-fiction, fantasy, and romance lovers alike! And, there's more to come in the series, and the world. Check out Lindsay's other novel, EMPEROR'S EDGE for more high-stakes action. 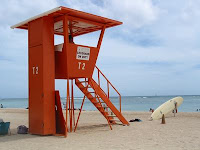 RMM: Tell me a little about yourself and ENCRYPTED.

LB: I’ve been a lifeguard, a Taco Bell peon, and a soldier in the U.S. army, but I’ve been making a living as a solo internet entrepreneur since 2003 or so. I’ve done blogging, affiliate marketing, web site flipping, search engine optimization, and lots of interesting stuff (I always have a hard time explaining my “job” to people though!).

For the “about Encrypted” bit, I’ll give you the book blurb. Since it took me ten tries to get one I actually like, I feel I should use it whenever I have a chance!

Professor Tikaya Komitopis isn’t a great beauty, a fearless warrior, or even someone who can walk and chew chicle at the same time, but her cryptography skills earn her wartime notoriety. When enemy marines show up at her family’s plantation, she expects the worst. But they’re not there to kill her. They need her to decode mysterious runes, and they ask for help in the manner typical of a conquering empire: they kidnap her, threaten her family, and throw her in the brig of their fastest steamship.

Her only ally is a fellow prisoner who charms her with a passion for academics as great as her own. Together, they must decipher mind-altering alchemical artifacts, deadly poison rockets, and malevolent technological constructs, all while dodging assassination attempts from a rival power determined the expedition should fail. As if Tikaya didn’t have troubles enough, her new ally turns out to be exiled fleet admiral, Federias Starcrest, the man who recommended taking over her nation. To trust him could be a mistake; to fall in love with him would be a betrayal to her people, her family, and the fiancé she lost in the war. Those runes cloak more than mysteries, however, and he may be the only one who can help her unravel them before their secrets destroy the world.


RMM: That's quite an array of different jobs! I'm glad that you settled on writing, in the end.

How long was the journey from the idea to the actual publishing of the book?

LB: Encrypted is my second novel and the whole process was much smoother (and quicker) than for the first. I started it around March of 2010, finished the rough draft in July or so, then spent a few months having it critiqued, edited, etc. The ebook came out in January. 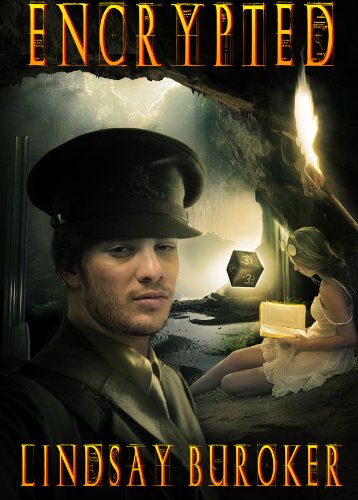 RMM: Give me three fun facts about e-publishing that I might not know.

LB: I haven’t counted personally, but I read that in January 2011 Amazon sold more ebooks than dead-tree books for the first time.

If you’re a book reviewer (or any kind of blogger for that matter), you can make money promoting other people’s ebooks as an affiliate. At Amazon the cut isn’t large, but at Smashwords authors can choose, and some give away a big chunk (I give affiliates 75%).

You can turn short stories, novellas, and anthologies into ebooks as well as novels. All the old rules about word-count length go out the window.


RMM: What do you find is the hardest about e-publishing?

LB: Cover art! I’m not artistically talented (I wear jeans all the time so I don’t have to worry about matching clothes), so figuring out where to find people and what to ask them to do has been interesting (okay, painful). I’ve had people say “that’s horrible” and “I love that!” about the same cover illustration, so what’s a gal to do? 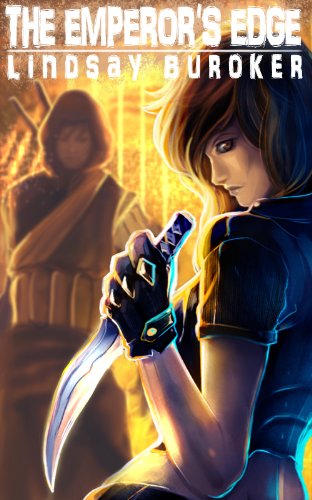 RMM: I think the designs are well chosen. Stylistically, THE EMPEROR'S EDGE is very eye-catching, with the blade in the forefront. I like how ENCRYPTED and THE EMPEROR'S EDGE both have a background image that draws the eye, and shows the heroine and hero.

A little more on your characters in ENCRYPTED. Which was the hardest to bring to life on the page? The easiest?

LB: Tikaya and Rias were both a little challenging, not so much in finding their voices, but in that they’re (in theory) much smarter and better educated than I am. I love intelligent heroes and heroines, but if they’re supposed to be doing clever things, that means I have to come up with clever things. I wouldn’t have it any other way, but sometimes I’m envious of those authors with thugly swordsmen for heroes.

The easiest character to bring to life was the expedition commander, Bocrest. I was in the army for a few years, so I can remember plenty of surly NCOS who liked to curse out us young enlisted peons.

The assassin Sicarius was pretty easy, too, since I’ve known him a long time from my Emperor’s Edge stories.


RMM: What's the most interesting piece of research that you found while writing ENCRYPTED?

LB: Hm, I do like finding out about geeky things. I skimmed through The Code Book: The Science of Secrecy from Ancient Egypt to Quantum Cryptography, and cryptography definitely has an interesting history. One of the earliest ways of sending secret messages was to tattoo the information on a slave’s head, then let the slave’s hair grow out and send him off to his destination with nobody the wiser.

I watched a History Channel special on how the Rosetta Stone was found and deciphered too (it took years and a lot of people trying!). That was interesting and gave me an idea just how challenging it would be to decipher an unknown language. Of course, we must take some liberties when writing fiction.


RMM: Languages and linguistics are especially interesting to me, which is one of the reasons that I was drawn to this book. Some of the description where Tikaya was trying to translate the language seemed very authentic. Liberties aside, I think readers can tell when an author has put some research behind their work.

Are you working on anything new right now? Can you tell me anything about your current project?

LB: I’m working on Book 2 for what will become The Emperor’s Edge series. I’m also chatting with some folks who do podiobooks. I’m hoping to do an audio version of EE and release it in episodes (like they did for old radio serials) for iTunes and Podiobooks.com.


RMM: Sounds like fun! I've really embraced audiobooks and e-books as an alternative to print.

If you were a biographer, who's life would you choose to write about? (not your own!) Why?

LB: Nobody. I don’t care much for writing non-fiction. I’d be tempted to make things up for the person. I hear that’s not good in biographies.


RMM: I want to hear your elevator pitch!

LB: Uh oh. I don’t have one. :P I’ve sent out a grand total of five query letters in my life, and I’ve never pitched anyone at a conference or convention or anything like that. I didn’t get very far into that whole process before finding out about e-publishing and deciding to handle things myself.

RMM: I'll forgive the lack of an elevator pitch, this time. ;-) 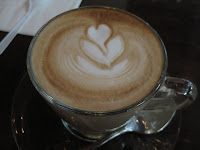 Coffee or tea?
A double tall vanilla latte with rice milk (or hemp or coconut milk if I’m making it at home or it’s one of those really progressive coffee shops!).

Early riser or night owl?
Night owl. I’m rarely asleep before 1 am. Being in the army was rough! I reverted back to a night person as soon as I escaped.

I have a Ford Escape Hybrid, so I guess Prius would be the closest. I’m not really a car person though. I like being up high and having room for my dogs and all my junk.

Summer at the beach, or winter in a cozy cabin?
Winter on a tropical beach! Summer in Seattle is nice, but it’s dreary here in the rainy season (October to May or so, heh). That’s when I like to escape someplace warm.

And finally: author, blogger, ... ? (Fill in the blank with an appropriate personal descriptor)
Geek.


RMM: Thanks Lindsay, for submitting to my questions. It's always great to get to know the author behind the book!