Today I have Mary Abshire stopping by Read My Mind. She's the author of the Soul Catcher novels that include: CLAIMING THE EVIL DEAD, CATCHING AN EVIL TAIL and FIGHTING EVIL, which are all published by Noble Romance Publishing.


Author Bio:
Mary is a part-time Paranormal Romance and Urban Fantasy author living in Indianapolis with her loving husband, witty daughter, and ridiculous cat. The paranormal world has always been an interest of her's. She grew up watching Sci-Fi and Horror shows. As a teenager--many, many years ago--she read Anne Rice and wrote to pen-pals (stamps were cheap and computers weren't in every household). Though she dropped the pen for a while, her love for the paranormal continued. She started writing full length novels a few years ago and hasn't stopped. Not only does she love stories about vampires, she enjoys books with demons, werewolves, shapeshifters, dragons, and just about any supernatural creature.

Mary is a PRO member of the Romance Writers Association and Fantasy, Futuristic, and Paranormal Chapter. 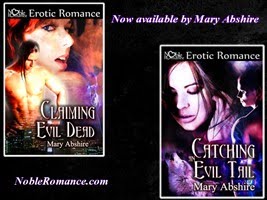 Hello Everyone! Thanks for stopping by and reading my post.
I'm on a blog/book tour promoting my second Soul Catcher novel, Catching an Evil Tail. Today I'm going to talk about book covers. How important are they?
A couple of years ago, I almost passed on reading Charlaine Harris' Sookie Stackhouse series. Why? Because of the book covers. I'm not fond of them. But the blurbs sounded interesting. I picked up the first book, read through it, and fell in love. I read the entire series fast. But, as I said earlier, I almost passed them up.
Still today, I see a lot of paranormal romance covers that are . . . not appealing to my eye. But, once I read the blurb, if I'm interested, I give it a shot. 9 out of 10 times, I like the book and want more. Even titles sometimes make me want to stay away from the book. Some just sound so cheesy. But again, I try the book out and end up liking it. So, in my opinion, book covers and titles do not sell the book to me.
I've read many discussions about this topic. One reader made a comment on a blog I posted or was a guest on and said they almost passed up on my book because of the cover. So I'm thinking I'm not entirely alone on this. Covers are nice, but they don't sell the book. In my opinion, the blurbs, excerpts, and reviews help sell the book.
Anyone care to agree or disagree with me?

Thanks Mary! I have to say that an unappealing cover may stop me from picking up a book when I am shopping in the store. But, since I started blogging, I rarely do cold purchasing anymore. Most times, I've read a blurb, or even an excerpt, so the cover is not really a consideration in buying and/or reviewing the book.

Mary and I both want to know what you think about this topic. Please feel free to comment with your thoughts.

From Good Reads:
Half-demon Jessie Garrett is searching for an evil vampire that's been preying upon children. She wants to claim the rogue vamp's soul and send it to hell. To find the dead man walking she must partner with another bloodsucker, Drake, even though she doesn't trust him. While Jessie works with Drake, she learns not all vampires are killers and discovers the cold-blooded vamp is a temptation too difficult to resist.

After the fiend abducts another child and Jessie has a near fatal experience with vampires, she turns to Jeremy, a demon she bumped into at a club, and makes a deal with him for his help. Drake disapproves, and Jessie soon finds herself wedged between two volatile creatures. When the chance comes to save the child's life and claim the evil vamp's soul, she must decide whom she can trust—a vampire who cools her feverish desires, or a demon hell-bent on seducing her.

From Good Reads:
Half-demon Jessie Garrett wants to live a normal life among her friends and keep her soul catching ability a secret, but supernatural creatures keep popping up in her world. Adding to her struggles, her vampire lover remains out of the country, and when he offers no valuable explanation as to why he hasn't returned, she wonders if she should move on without him.

As if Jessie doesn't have enough worries on her mind, the demon yearning to seduce her shows up at her home. She longs to liberate herself from the debt she owes him, and when he asks for her help, she jumps at the chance to make a new deal with him—one that will guarantee her freedom. The only catch? She has to send the soul of a werewolf to hell.

Love, trust, and loyalty are on the line. Torn between her feelings for her vampire boyfriend, a hot Alpha wolf, and a demon vowing to protect her, Jessie must figure out her heart's true desires.

From Good Reads:
Half-demon Jessie Garrett's battles seem endless. While Jeremy, the demon out to win her heart, teaches her how to fight, Jessie's relationship with her vampire lover, Drake, reaches a breaking point. Adding to her struggles, she must defend her life against a group of vampires who consider her a threat to their existence. Held captive on a remote island with both Drake and Jeremy protecting her, she is tested in ways she's never imagined. Jessie fights back; only her actions do more harm than good. The group offers her a choice, but no matter what she decides, her life will change forever.