A closer look at Lacey Weatherford's The Demon Kiss with Excerpt and Giveaway!

I am so happy to be hosting an exclusive excerpt from Lacey Weatherford's THE DEMON KISS at Read My Mind today! This book is the second in the OF WITCHES AND WARLOCKS series, and is brought to you through The Bookish Snob Promotions. Here's a little more about Lacey: 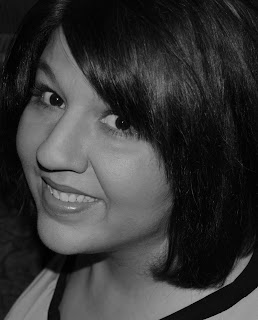 Author Bio
Lacey Weatherford has always had a love of books. She wanted to become a writer after reading her first Nancy Drew novel at the age of eight.
When she is not reading, writing, blogging, or doing book tours for her current series, she can often be found out at sporting/musical events which her kids are in or texting like crazy with her best friend.
Lacey resides in the White Mountains of Arizona, where she lives with her husband, six children, one son-in-law, and the family dog Sophie.

And here is the rather steamy excerpt:

“Then kiss me.”
I knew I was tempting fate with this request, but I had to know how he would react.
He hesitated for a moment before he finally pulled me to him and kissed me gently.
I didn’t close my eyes. I wanted to see his reaction, and I found he didn’t close his eyes either, instead choosing to look deep into my mine.
He rolled me over suddenly, so I was on my back and he was leaning over me. He just looked at me for a minute, stroking my hair, and then he brought his mouth down to mine and kissed me like he was starving to death.
I felt the passion between us heat up quickly, but still I didn’t take my eyes off him. I saw the red color flash through his irises, signaling that his desires could be getting out of control.
He didn’t move from me, though, continuing to kiss me. As his fervor began to grow his eyes became redder still.
I watched him, until he left my face to trail his kisses down my throat to the purple mark that was so clearly visible on my neck. I closed my eyes and let him nibble slightly at the spot before he moved back up to my lips.
I reopened my eyes to stare into his flaming ones.
“You’re playing with fire you know,” he commented casually brushing his lips against mine.
“Yes, I know.” I stared up at him.
“Why tempt fate? Or me for that matter?” He pull back a little bit from me so he could look at me.
“Because, if you were going to lose it and do something awful to me, you’d have done it by now. You have more control over yourself than you think.”
“So you’re testing me then?”
“Yes.”
He started kissing me again. This time a little more roughly, passionately. His hands tangled in my hair, occasionally leaving to run up and down my arms, stroking them.
I wrapped my arms around him, pulling him down against me tightly, kissing him back with everything I had.
I heard him let out a small groan, and he pulled back away from my mouth so he could kiss my cheek.
“We need to stop this,” he said and moved back down my neck to suck on that same spot again.
“No. I don’t want to.” I held him against me even harder.
I knew I was supposed to be just testing him, but I could feel that control slipping as he sucked at my throat.
“Don’t stop,” I said, breathless.
Wow, that would get me interested! Thanks Lacey, for joining me, and giving my readers a great peek into THE DEMON KISS. Want to find out a little more about the book? 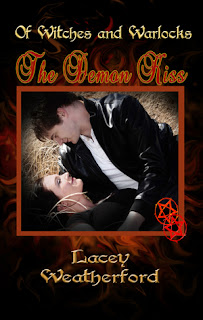 The Of Witches and Warlocks series can be ordered in ebook or paperback anywhere books are sold, including Amazon and Smashwords
Can someone else's past come back to bite you?
After being drained of nearly all the blood in her body, novice witch, Portia Mullins, wakes up to find that her warlock boyfriend, Vance Mangum, has fled in search of his demon father. Determined to keep him from facing the evil alone Portia follows after him, unknowingly setting herself on the path of a new adventure that will take her, Vance, and their coven over international borders, into a foreign place where they will discover that the black magic which awaits them is far worse than they ever imagined. Portia finds herself tangled up in a web of lies and deceit in another's quest for demonic power in the excitingly romantic second paranormal novel in the Of Witches and Warlocks Series, The Demon Kiss.


Just for coming to Read My Mind today, Lacey is offering a giveaway of THE DEMON KISS to one of my readers. Just leave a comment with a way to contact you on this post. Have a question for the author? Has this post gotten you to add the OF WITCHES OR WARLOCKS series to your TBR? Just want to share the love if you've read it before? Just comment relevantly to enter for your chance to win!


Don't forget to visit the other stops on the tour. There are more giveaways, guest posts, interviews, excerpts, and reviews coming! Check out The Bookish Snob on May 27th. And be sure to follow to the last day for the grand prize wrapping up THE DEMON KISS tour.

The Grand Prize winner will receive swag, signed copies of books 1, 2, 3, & 4, AND will be written into an interactive scene with VANCE in book four too!
Want extra entries? You can get 1 more entry for every time you comment on the tour, and 5 more entries for every time you send a Tweet or Facebook the link to that day’s blog post. Make sure you keep track of those as you will be asked to submit verification links when you enter the giveaway.
Posted by Lillie (AliseOnLife)