Bestseller For A Day! Sponsored by Indie Book Collective

The great people behind the Indie Book Collective are back with another Bestseller For A Day. Don't know what that is?

Bestseller For A Day is a 24-hour promotion for one of the Indie Book Collective authors. It gives them the chance to have their book featured with participating blogs and sponsors. The whole point? To offer a full-length novel specially priced at $.99, promote a great author and book, and hopefully the sales on Amazon from the day will help drive the book up the bestseller list. 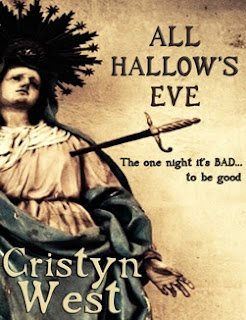 All Hallow's Eve: The One Night it is Bad to be Good
People are being martyred but not for their faith. Instead the deaths are part of a serial killer’s sick game as he chooses his victim by their name… then kills them in that Saint’s grisly manner.

Here's the details on Bestseller For A Day. Remember, it only lasts until 11:59pm today, October 28th.


By helping us drive All Hallow’s Eve by Cristyn West to the top of the Kindle Lists on October 28th, YOU can win, too!

Because Cristyn is giving away a brand new Kindle!

Simply purchase All Hallow’s Eve on October 28th, then head back here and fill out the entry form (located at the top of the right hand column).

You will only need to enter your email address and the first five numbers from your Amazon purchase confirmation code.

And tah-dah! You just gained 5 entries to win a Kindle!

To celebrate All Hallow’s Eve’s big day, these authors are dropping the price of their amazing titles to just 99¢!!!!

Just head over to their Amazon.com pages and see what all the fuss is about!

A horror movie that causes people to die?

Something so scary that people watching it are bleeding out of their eyes, having heart attacks and ripping their own faces apart? The docu-horror film called Terror in the Trees sounds harmless enough, doesn't it?

That's what FBI Agent Derek Bolder thought when he was given the mission to go to Hollywood to bring back the film. He hadn't yet understood the sheer evilness contained within it...but he soon would.

Derek's ex-fiancée Jill, the beautiful and sexy film executive, is dead set against giving him the film. It would ruin her career. What lengths would she and her nasty boss go to, to protect their reputations even as the bodies pile up?

The Evil Within, a Horror Anthology by Cristyn West, Amber Scott, et. al.

The hiss of hot breath coming from inside the coat closet.

The noxious odor of plastic smothering your face as you fight to breathe.

The nagging feeling that someone is watching your every move...waiting.

After reading these nine chilling tales this Halloween, how many times will you soothe yourself in the dark thinking "there are no monsters"?

The man who haunts her dreams enters her reality, claiming she's transforming into a changeling--not quite immortal but no longer human. Except nobody wants this change. Not humans, not immortals and least of all her.

Battle lines are drawn and blood spills as the two fight not only for her life, but for mankind's as well.
Posted by Lillie (AliseOnLife)