Please welcome Angela Corbett to Read My Mind today. As part of the blog tour, sponsored by Once Upon A Twilight, I have the honor of hosting a cover interview with the author about her upcoming release from Pendrell Publishing, ETERNAL STARLING. 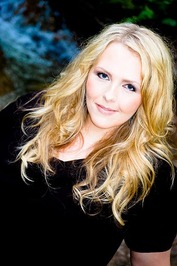 As a child, Angela Corbett’s most prized possession was a set of read-along books. She used to follow along with the narrator on the stereo and dream of when she would be able to read by herself. Her childhood reading habit led her to consider her future career. However, after consulting with her parents, she realized she had already exceeded hobbit height and since fairies and dragonslayers were tricky jobs to get, she decided she wanted to create worlds of her own. She started writing poetry in elementary school and worked as a journalist in high school and college, but could never leave her love for writing fiction behind.

She is a graduate of Westminster College where she double majored in communication and sociology. She has worked as a journalist, freelance writer, and director of communications and marketing. She loves classic cars, traveling, and escaping in a good book. She lives in Utah with her incredibly supportive husband and their five-pound Pomeranian, Pippin, whose following of fangirls could rival Justin Bieber's.

What can you tell us about the book cover?
The Emblem of Eternity trilogy is really about my main character, Evie, so we wanted to make her the focus of the Eternal Starling cover. One of the things I love the most about the cover is how retro the photo looks. The colors are gorgeous and I love that the soft look of the image captures the romantic feel of the book. I also love the title font!
Did you get to be part of the cover creation process?
My publisher was really great about listening to my ideas and letting me give input about the book cover. Before the cover photos were taken, my publisher talked to me about colors, locations, and the model. The cover was actually photographed in Utah, and I got to be there for the shoot!
Can you tell us about the flower on Evie's back?
The flower on Evie's back is a lily, and it's important to the mythology of the trilogy and to Evie especially. People have mentioned that the lilies on the cover look like tattoos, but they actually represent Evie's pink lily-shaped birthmark. The original plan was to only use the pink lily on the cover, but when the designer started working on it, one lily looked too small and made the cover seem unbalanced. Because of that, the designer added two gray lilies, but in the book, Evie still only has one pink lily birthmark. I love how it turned out though!
What are some of your favorite book covers?
I have so many!!! I love the Beautiful Creatures cover. I also love the cover for Hush, Hush, and The Mortal Instruments series.
What can you tell us about the cover model?
Isn't she gorgeous!?! She's actually a friend of mine! When we started thinking about a model for the cover, I told my publisher I had someone in mind and asked if we could use her. She was perfect for my vision of the cover, and my publisher agreed!
Do you have any fun stories from the cover photo shoot?
The photographer for Eternal Starling was amazing and took so many fantastic photos! I didn't know how the designer would decide which photo to use! The cover was shot near a waterfall in the Utah mountains. The pictures were taking during summer and the runoff from the snow was high, so the model and photographer's toes almost froze from standing in the cold water for so long. Some of us also almost fell in the water too. It was a good time. J I'm glad the model and photographer were such good sports about it! 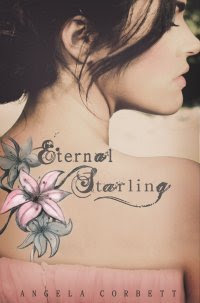 
Evie Starling has lived a relatively uneventful life hanging out with friends, gossiping about boys, and driving her 1966 Mustang. All of that changes when she moves to Gunnison, Colorado, to start college and meets two mysterious men.

For centuries, Alex Night and Emil Stone have yearned for Evie—but they each have their own reasons for wanting to be with her. When both men claim to be her soul mate and tell her about an unbelievable past, Evie learns that she’s not the person she thought she was. Soon, Evie finds herself in the middle of an age-old battle between the Amaranthine Society—the soul protectors, and the Daevos Resistance—the soul destroyers. With a past she doesn’t understand, and a future rife with danger, Evie has to decide who she can trust. But Alex and Emil aren’t the only ones who want Evie, and her soul is about to become the rope in an eternal tug-of-war.

Thanks so much, Angela, for visiting Read My Mind!

Angela Corbett is also having a contest for those who pre-order Eternal Starling from any retail source from now until December 6th. Just send a screen shot or photo of the receipt or order confirmation to: EternalStarlingContest@gmail.com.

The Prize: A Kindle!


Don't forget to visit Once Upon A Twilight's Blog Tour Page. All of the stops are listed, and there are some great giveaways, guest posts and interviews happening! Also, come back to Read My Mind on December 1st for my review.
Posted by Lillie (AliseOnLife)