I have the great pleasure of being part of the TEMPEST blog tour today. Julie Cross has written a wonderfully engaging YA time-travel novel, that I loved reading. Want to find out a little more about two of the main characters? You're in luck. Jackson is the one who travels, and Adam is his partner-in-crime in tracking his "jumps".

Please welcome Adam and Jackson to Read My Mind today. They'll be answering a few questions about their friendship and lives in TEMPEST by Julie Cross.


Thanks for being here! First, Adam, since you know a little about the science behind what Jackson can do, how about you explain it in your own words?

Adam: I wish I could answer this with more “fact” and less “theory,” but honestly there’s so much that we don’t know about the human brain…it’s almost like Jackson taps into a wire the rest of us haven’t turned on. Maybe if we could figure out how he turns this section of his brain on, more people would have these abilities.


And Jackson, how would you explain your "jumps"?

Jackson: For the most part, it’s like walking through a memory. It hurts like hell at first and then I’m just light as air with very little repercussions for my actions. Nothing changes. I guess I’m cool with that, but sometimes I think it’d be nice to alter something. But that’s, like, permanent and I’m so not ready to deal with that responsibility.


Why don't you two tell my readers a little about how you first met? What's something that wouldn't be in TEMPEST?

Jackson: It all started with this nuclear power plant in Russia—
Adam: Shut up! He’s kidding.
Jackson: I’m kidding. We met at camp counselor orientation at the 92nd street Y, but we started our scientific relationship after a spring campout. Adam brings out my serious side and I’ve dragged the fun out of him.
Adam: We both joke about what it would have been like if we’d been in high school together, but I can’t even imagine that.
Jackson: Why? Cause you think I’d never go slumming in a New Jersey public school?
Adam: No. Cause I’d never be caught dead in a Manhattan private school or that dorky blazer and tie you had to wear everyday.
Jackson: Yeah, I’m not a fan of that uniform.


Adam, what do you do while Jackson jumps?

Adam: You mean besides steal his wallet? Kidding. I keep the time on a stop watch and check his pulse which drops significantly when he’s in the vegetative state. That’s how I can tell he’s “back” so to speak. His heart rate increases even before he becomes aware of his surroundings.


Jackson, do you really tell Adam every single detail of what happens on your jumps?

Jackson: Uh…mostly. I’ve told him when I’ve deviated from our original plan but it’s possible I didn’t give him every single detail of what may have caused my diversion.


Some fun stuff (Both answer):

Jackson: Coffee…straight up, black.
Adam: None of the above. I don’t do caffeine.

Jackson: Depends on if there’s something interesting enough to keep me up. Otherwise, I guess I’m an early riser…before noon is early, right?
Adam: Both. I function just fine on very little sleep.

Jackson: I managed to escape the family car at NYU this year but now that I’m home for the summer, I’m back to being chauffeured. Dad’s rules. I guess some things never change.
Adam: In Jersey, I drive a 1975 Mustang that I’d date and possibly marry if it were legal. In New York—public transportation. I’m on budget.


Read a book or watch the movie adaptation?

Jackson: Both
Adam: Both

Jackson: Double major—English Lit and French Poetry
Adam: I’m still undecided. M.I.T. is pushing me toward programming, but I’m thinking about ticking them off and studying German history or Women’s studies. It’s not like M.I.T has anything to teach me about programming that I don’t already know.


What are the top 5 songs on the soundtrack to your life?

Jackson: Everyday Is Exactly The Same—Nine Inch Nails, Paper Planes—MIA, Somewhere Only We Know—Keane, Sympathy For The Devil—The Rolling Stones, Don’t Stop Me Now—Queen
Adam: Halleluiah—Jeff Buckley (the only version I will listen to), Mad World—Gary Jules, Hold On Hope—Guided by Voices, Under Pressure—Queen, Waiting On The World To Change—John Mayer


And finally, what one place or person would you visit if you could both jump to any time or any place?

Jackson: I’d like to see the Holly Flynn that Adam has been telling me about…this younger one with braces and zits. I won’t believe it until I see it.
Adam: unlike Jackson, I wouldn’t waste my one opportunity on something ridiculous. I’d meet Mr. Time Travel himself, Albert Einstein. Maybe if I could tell him how technology has advanced he could help me figure out what’s up with Jackson and his freakish brain.


Thanks Jackson, Adam and Julie Cross for stopping by Read My Mind! 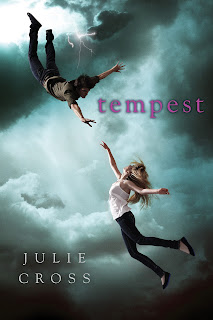 From Good Reads:
The year is 2009. Nineteen-year-old Jackson Meyer is a normal guy… he’s in college, has a girlfriend… and he can travel back through time. But it’s not like the movies – nothing changes in the present after his jumps, there’s no space-time continuum issues or broken flux capacitors – it’s just harmless fun.

That is… until the day strangers burst in on Jackson and his girlfriend, Holly, and during a struggle with Jackson, Holly is fatally shot. In his panic, Jackson jumps back two years to 2007, but this is not like his previous time jumps. Now he’s stuck in 2007 and can’t get back to the future.

Desperate to somehow return to 2009 to save Holly but unable to return to his rightful year, Jackson settles into 2007 and learns what he can about his abilities.

But it’s not long before the people who shot Holly in 2009 come looking for Jackson in the past, and these “Enemies of Time” will stop at nothing to recruit this powerful young time-traveler. Recruit… or kill him.

Piecing together the clues about his father, the Enemies of Time, and himself, Jackson must decide how far he’s willing to go to save Holly… and possibly the entire world.


Here's an exclusive teaser from TEMPEST:

“You took me to the future…does that mean…have you even been born yet?” I asked her.


Julie Cross is also kindly giving away 5 signed copies of TEMPEST during the tour. To enter to win one of those copies, fill out the form here and leave a comment.

Enter at each stop using the form supplied by the blog, and you will have 15 total entries. You can check out the complete tour schedule at Books Complete Me.