Source: Bewitching Book Tours, no other compensation given for an honest review 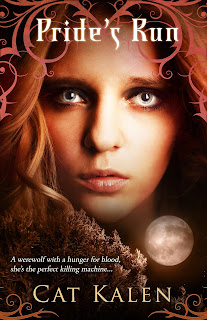 Seventeen year old Pride is a tracker—a werewolf with a hunger for blood. Taught to trick and to lure, she is the perfect killing machine.

Kept leashed in the cellar by a master who is as ruthless as he is powerful, Pride dreams of freedom, of living a normal life, but escape from the compound is near impossible and disobedience comes with a price.

When she learns her master intends to breed her she knows she has to run.
But Pride soon learns that if she is to survive in the wild, she must trust in the boy who promises her freedom, the same boy she was sent to hunt.

With life and death hanging in the balance the two find themselves on the run from the Paranormal Task Force—officers who shoot first and ask questions later—as well as her master’s handlers.

Can Pride flee the man who has held her captive since birth and find sanctuary in the arms of a boy who has captured her heart? Or will her master find her first?

My Review:
PRIDE'S RUN is a great paranormal YA. I have a fondness for shifter books, but don't actually read that many in the YA category. This book caught my eye with the synopsis right away. Usually shifters are at the top of the food chain in paranormal books. They're faster, more dangerous, and they are only part human. PRIDE'S RUN takes a look at the other side of the coin, where shifters are subjugated and controlled by humans.

In fact, PRIDE'S RUN draws some disturbing parallels to human trafficking and the way that people can be used as property to those rich enough and lacking morality. Pride is a young woman who's been born into captivity and has never known anything other than the brutality and indifference of her master. He uses her as an assassin that his targets never see coming, mostly because of her youth and pretty face.

Cat Kalen's characters are ruthless and lack any kind of childhood, and yet both Pride and her nemesis at her master's compound have a certain vulnerability. Despite the fact that they live in an unconscionable world, Pride has a family in some of the other werewolves held with her. The pace of PRIDE'S RUN is frenetic and intense, taking place in present tense, yet the reader can still get a sense of how Pride has survived for as long as she has, the friends that she has, and the events that have shaped her personality.

What I liked about Kalen's plot, characters and setting was that it combined the best parts of a paranormal coming-of-age with an urban fantasy. PRIDE'S RUN was edgy and dangerous, with disturbing events right from the start. But, that wasn't all of the story. With the romantic bond that forms between Pride and Logan, (which doesn't over take the story, well done) and Pride's initial fear of her fellow werewolf enemy, Stone, which later turns into confusion over some of his actions, this is a well-rounded novel.

Though I do think that PRIDE'S RUN could be inappropriate for younger or less advanced YA readers, anyone who enjoys a paranormal read involving werewolf shifters should not be disappointed.

Highly Recommend, if you liked:
Phantom Universe by Laura Kreitzer
Raised By Wolves by Jennifer Barnes
The Shifters of 2040 by Ami Blackwelder