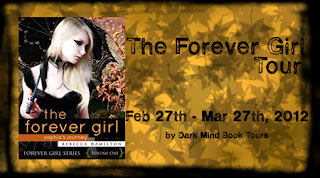 Read My Mind welcomes Rebecca Hamilton to the blog today. She's guest posting and talking a little about her book, THE FOREVER GIRL.

My review of THE FOREVER GIRL will be posted later this afternoon, so come back to check it out. 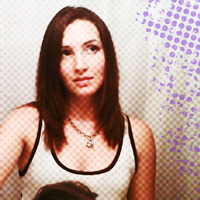 About The Author:
Rebecca Hamilton writes Paranormal Fantasy, Horror, and Literary Fiction. She lives in Florida with her husband and three kids, along with multiple writing personalities that range from morbid to literary. She enjoys dancing with her kids to television show theme songs and would love the beach if it weren't for the sand. Having a child diagnosed with autism has inspired her to illuminate the world through the eyes of characters who see things differently.
Website | Blog | Twitter | GoodReads

Read My Mind:
Rebecca, can you speak a little about the inspiration behind THE FOREVER GIRL. The plot sounds wonderfully shaped, with great world building. Did the story come to you first or Sophia's character?

Rebecca:
Thanks for hosting me on your blog :)

The Forever Girl came to me as a very general idea. That very general idea never made it into book one. I pretty much knew what I thought would be the turning point in the story as well as where the story began and that the character was Wiccan. Once I started writing, things changed. A lot. For example, the novel was initially a YA story, but time soon showed that wouldn’t work. I think it’s a bit of an in-between, and I like to steal St Martin’s Press’ term “new adult”, as I do think this story would appeal more to those 18-30, though my readers have shown me the appeal is a bit broader.

The other thing that changed was that one main turning point I thought I was writing toward. One of the characters took over, and that was when the story turned from a standalone novel to a trilogy. I still like to think all the stories in this series can stand alone, though :) After that, I started having more story ideas, and this world sort of just “stuck”. Soon, I had seven novels planned for the series.

This isn’t your typical series. All the novels can stand alone, though books 1, 4, and 7 (Sophia’s Journey) almost act as a trilogy within the series. The other books in the series feature different characters. There are also some novellas planned that explore other corners and characters of this world.

When it comes to story and character, though, it’s hard to separate the two. I find that my story and characters more-or-less come to me together. They are a package. And sometimes I don’t know what that package really entails until I start writing the story my characters tell me what to write.

Thanks so much for the insight into THE FOREVER GIRL and Sophia! I'm really interested now in seeing how other characters take up the lead mantle, and how returning to Sophia in books 4 and 7 impact the series.

From Good Reads:
Sophia Parsons’ family has skeletons, but they aren’t in their graves...

Solving the mystery of an ancestor’s hanging might silence the clashing whispers in Sophia's mind, but the cult in her town and the supernaturals who secretly reside there are determined to silence her first.

As Sophia unknowingly crosses the line into an elemental world full of vampire-like creatures, shapeshifters, and supernatural grim reapers, she meets Charles, a man who becomes both lover and ally.

But can she trust him?

It’s not until someone nearly kills Sophia that she realizes the only way to unveil the source of her family's curse: abandon her faith or abandon her humanity. If she wants to survive, she must accept who she is, perform dark magic, and fight to the death for her freedom.
Barnes and Noble | iTunes | Amazon

Make sure you check out the full tour schedule from the tour organizer and host Dark Mind Tours. There's more reviews, guest posts and interviews in store. Plus, Rebecca Hamilton is kindly giving away an e-book copy of THE FOREVER GIRL and a Forever Girl scented candle throughout the tour.

The next stop is at: Book Savvy Babe on March 15th.