Ella James is a Colorado author who writes teen and adult romance. She is happily married to a man who knows how to wield a red pen, and together they are raising a feisty two-year-old who will probably grow up believing everyone’s parents go to war over the placement of a comma.

Ella’s books have been listed on numerous Amazon bestseller lists, including the Movers & Shakers list and the Amazon Top 100; two were listed among Amazon’s Top 100 Young Adult Ebooks of 2012.

Questions or comments? E-mail her at ella_f_james@ymail.com. 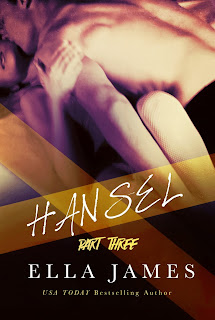 One boy. Mother calls him Hansel.

One girl. Mother named her Gretel. Locked in little rooms, in the mountainside mansion of a crazy woman. Until he saws a hole into the wall dividing them. Then at least, they have each other’s hands.

It doesn’t end well at Mother’s house. Everything gets…broken.

And most of all, a mask.

What happens to love when it gets twisted?


Check out the rest of the Hansel Series on Goodreads HERE.