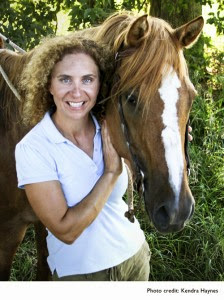 A native of New York State, Karen Ann Hopkins now lives with her family on a farm in northern Kentucky, where her neighbors in all directions are members of a strict Amish community. Her unique perspective became the inspiration for the story of star-crossed lovers Rose and Noah. When she’s not homeschooling her kids, giving riding lessons or tending to a menagerie of horses, goats, peacocks, chickens, ducks, rabbits, dogs and cats, she is dreaming up her next romantic novel. 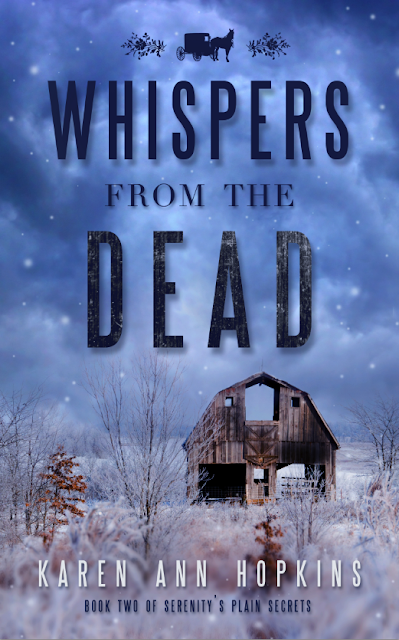 Excerpt from Whispers From the Dead:

I was slipping my gloves on and almost to the car when I noticed Daniel standing beside his Jeep. Apparently he was waiting for me. I was in the process of weighing the pros and cons of stopping to talk to him when he pushed away from his vehicle and strode over, meeting me halfway to my cruiser.

I chuckled and my breath spread out into an icy mist between us. “Not much happiness going on around here.”

“It could be worse.”

I risked looking directly into his eyes and said briskly, “Oh, yeah, no one’s dead this time, but Jory probably wishes he was.” I shook my head. “Dammit, I don’t understand why people do this to each other. If Ruby wanted out, why not just tell Jory and be up front about it. And then again, why would she even want out; three beautiful girls and nice house in the suburbs, a great guy. What’s the matter with her anyway?”

Daniel smiled at my little tirade, looking down at his booted foot as he pushed the snow around briefly before meeting my gaze once again.

“I’d really rather be talking about us.”

“You know, you…me…us.” His white teeth flashed in a brilliant smile and I was once again completely at a loss as to why this gorgeous guy was stalking me.

wind that was gusting hard enough to catch the loose snow in the parking lot and spray it up into the air in wild sheets of bitter cold around us. I was even tempted to take another step closer and steal some of the heat that seemed to radiate off of him, but I controlled myself and stood still.

I had a sudden vision of Daniel, minus the Carhart jacket and the flannel shirt. I knew that underneath all those winter clothes was a well-defined chest that connected to washboard abs. I definitely didn’t want to think about his firm butt or his strong thighs so I quickly forced the image to evaporate, and met his gaze squarely. Unfortunately, looking at his wide spaced brownish-black eyes and the amused set to his jaw that was covered with a few days worth of black stubble wasn’t much safer. He was too dammed handsome for his own good.

“We’ve already discussed this. It’s not a good time for us to get involved.”

His amusement quickly changed to frustration and he snorted. “What are you waiting for? We’re both available, we’re highly attracted to each other, we survived a harrowing experience together…what more do you need to simply go out for dinner and movie with me?”

Maybe I was being a complete idiot. I had issues—I knew it. But letting Daniel into my life was about the scariest thing I had ever faced. A gun pointed straight at my head was more welcome than the prospect of putting faith in any man, especially him.

“This is just a game to you, isn’t it? The minute I agree and go out with you, you’ll grow bored and move onto someone else. So why the hell should I even bother.”

His eyes widened for an instant in understanding and then he took a measured sigh. “Someone must have really betrayed your trust for you to be so paranoid.”

I smiled and nodded, “Yep, I won’t deny it. Just look at what went down in there tonight.” I pointed at Charlie’s with an angry thrust of my arm. “Jory and Ruby were supposed to be a happily married couple, with kids and a dog, the whole package. Now their lives are ruined. They’ll probably be divorced and both sleeping with new partners by this time next year.”

“I get what you’re saying. I really do. But it doesn’t have to be like that for everyone…or for us. I’m a patient guy, Serenity. And I have no problem waiting for you to figure out how unreasonable you’re being. Besides, we’ll have that long drive up north with only the two of us in the Jeep and then a whole week in a secluded Amish community together to talk more about this. So I’m not overly concerned with your avoidance at the moment.”

The return of his smug expression cut through the honey warm desire that had been spreading through me for simply standing too close to him. He thought he had it all figured out, but I was determined to show him that he didn’t know anything at all.

The cold air once again sent a chill through me and I zipped my jacket up to my neck and said, “Actually, there’s been a change of plans.” The sudden arch of his eyebrows was priceless and I quickly hurried on, “I’ve decided to leave tomorrow after all.”

“But you know that I have to finish the Mayor’s guest suite. He has visitors arriving this week and I promised him,” Daniel said carefully.

I shrugged. “Sorry, Daniel, I have a tight schedule also. Since I’m officially on vacation in six hours, I’d like to be on my way. Perhaps I’ll get lucky and Bishop Esch and that Rowan fellow were overreacting about the mystery on their hands. I might be able to wrap things up quickly and you won’t need to make the trip at all.”

Daniel took a step closer and looked down at me. I couldn’t help but swallow hard at his close proximity.

“I thought you wanted my company on this one.”

Seeing the resolute look on Daniel’s face, a shiver of fear passed through me when I realized I could definitely push Daniel too far and then he would give up on me. As bitchy as I was being to him, I didn’t want to completely run him off. Part of me wished desperately that he’d stick around.

“Sure, I’d like your help with the investigation. God only knows how bat-shit crazy this Poplar Springs community probably is. But I don’t want to put you out either.”

Daniel took a long breath and stared at me for several more seconds before he finally said, “I’ll join you as quickly as I can. I’m sure you can handle the locals on your own until I arrive.” He suddenly had his arms around me in a tight, but quick squeeze. He whispered into my ear, “Happy New Year. I’ll see you soon.”

He turned and went to his Jeep without another glance in my direction. The infuriating emptiness that I had felt when he let go said plainly that I was already in way over my head with Daniel Bachman. But I reasoned to myself as I walked to the cruiser that we hadn’t even had sex, so I was still in a good position. He did not have a hold of me—yet.

Whispers From The Dead is the powerful and thrilling sequel to Lamb to the Slaughter, in the Amish mystery series, Serenity’s Plain Secrets.

Sheriff Serenity Adams and Daniel Bachman are once again partnered up in a criminal investigation, when they travel to a northern Amish settlement that has been riddled by arsons for the past two decades. Serenity quickly discovers that there is much more going on than just barns being set on fire in the touristy community, and that the new group of Amish has their own secrets to hide. She begins to unravel an extensive criminal underworld that threatens to destroy everything that the simple people of Poplar Springs hold dear and once again puts her own life in jeopardy.

And even though Serenity tries desperately to avoid it, things begin heating up between her and Daniel, making her wonder if true love and happiness are really within her grasp.


Check out the first book in the Serenity's Plain Secrets Series, Lamb to the Slaughter, on Goodreads HERE.