AJ Pine writes stories to break readers’ hearts, but don’t worry—she’ll mend them with a happily ever after. As an English teacher and a librarian, AJ has always surrounded herself with books. All her favorites have one big commonality–romance. Naturally, her books have the same. When she’s not writing, she’s of course reading. Then there’s online shopping (everything from groceries to shoes) and, of course, a tiny bit of TV where she nourishes her undying love of vampires, from Eric Northman to the Salvatore brothers. And in the midst of all of this, you’ll also find her hanging with her family in the Chicago burbs.

AJ's debut New Adult novel, IF ONLY, is out now with Entangled's Embrace line. The companion novel, WHAT IF, releases December 8th. Next year look for her new duo of New Adult books, ONE NIGHT and ONE LIFE with Penguin/Intermix.


Excerpt from What If:

Stunned silence. That’s my response as I watch him leave, but when the door bangs shut, I’m all words.

“What the hell was that? Miles, what do I… I don’t even…” Okay, maybe I’m all words, but I never claimed they were coherent.

Miles watches the door with me as he approaches the bar.

“Do you want control of your life, Mags?”

I nod. Everything I do is an attempt to regain control. Of course that’s what I want.

So I spring up from the stool and race outside to where Griffin sits, already behind the wheel of his truck. Thank God because I didn’t think this through. No coat.

I yank open the passenger-side door and climb in. Wide-eyed but grinning, Griffin waits for me to say something.

“I know. We have an agreement. I was there when we made it.” His confidence doesn’t falter, but his words are painted with a slight edge he means for me to hear.

I rub the chill from my arms, and Griffin starts the truck.

“For the heat,” he explains.

“I know about our agreement, but that doesn’t mean you get to waltz in here with this sort of anti-grand gesture and knock me on my ass.”

He lets the mask fall, and there he is—him.

“Knock you on your ass? Maggie, I didn’t mean…”

“I know. This is uncharted territory. So you know what that means.”

He sighs. Because he knows.

“Rule number one. Never, ever say good-bye without kissing me.”

“Good.” I run a hand through his hair, my itching palm finally getting its fill. “We’re even.”

He waits for me to come to him, and I press my lips to his, taste what I’ve been hungry for all week. But it’s more than just him. I taste his hunger, too. So we linger while the truck heats up, while his warm breath mingles with mine. For a few moments, it is the perfect kiss good-bye.

If only I knew what came after rule number one.

What If (If Only #2)
New Adult Contemporary Romance
Published: 8 December 2014 by Entangled Publishing 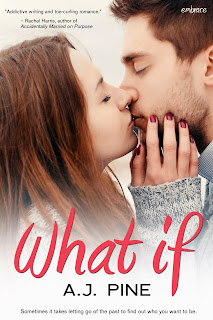 Sometimes it takes letting go of the past to find out who you want to be.

During his semester abroad, Griffin Reed almost gave his heart to a girl who loved someone else. Lesson learned. Now he’s home, where following in his father’s footsteps may not be what he wants, but it’s what his parents expect. It might be taking the easy road, but he doesn’t see a way out.

Something that could have killed Maggie Kendall took away the person she used to be instead. Her condition makes her dependent on sticky notes, photos, and medication just to get through each day. The last thing she needs is a distraction—or someone new to disappoint.

What they refuse to see is they are perfect for each other. Maggie makes Griffin want to be a better man, and he makes her believe a future is possible. But these two have to find a way to share the secrets ripping them apart, if they’re ever going to have a chance at happiness.