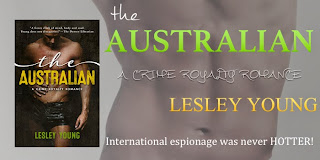 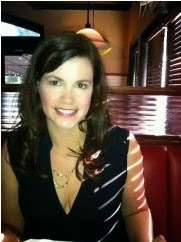 Lesley Young is an award-winning journalist by day and a compulsive romance novelist by night. Her most recent series—Crime Royalty Romance—features unforgettable heroines who fall in love with dangerous men while on adventures abroad. Her fast-paced novels are rich with intricate plots, sizzling romance and gripping character development. You'll root for her characters from page one!

I loved the main character, Charlie! She is a no nonsense, literal, takes everything at face value woman. But even though she says what she means, she is also a little naive and innocent. Prior to moving to Australia, she used being caretaker to her mother, and having the inability to read social cues correctly, as a way to avoid almost all types of relationships, with the exception of having one close friend, named B.

But Charlie's sheltered life takes a sharp turn to the opposite when she goes to interview for a personal assistant position for Jace Knight. Although Charlie seems to get off on the wrong foot with Jace, he still hires her for the job because her attitude and straight talk seem to intrigue him. Soon after, Charlie finds herself in a completely different world than she had ever imagined when she moved to Australia, which includes international spies and fast paced adventures across the continent.

I liked how Charlie's character was different from most female characters in romance novels. She didn't have some shady past that prevented her from forming relationships with men, so even though the result was the same due to other personality issues, the uniqueness of the storyline made The Australian stand out from the crowd.

The Australian has a little bit of everything to engage all genre readers - romance, intrigue, adventure, and a foreign locale (for US readers). Lesley Young not only captivated me with her characters, but also the descriptions of Australia itself. 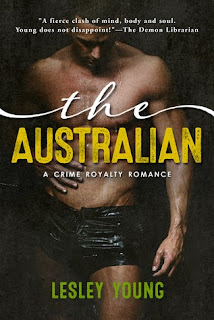 Charlie Sykes takes everything and everyone at face value—and believes life would be a lot easier if everyone else did, too. Aussie Jace Knight, international hotelier and purported playboy, has never met anyone like the absurdly literal and obliviously beautiful American who applies for his personal assistant position. The trouble is, how do you pursue a woman whose definition of flirting comes straight out of the Merriam-Webster Dictionary? That, and he’s not the only one after Charlie. Seems Mr. Knight might not be a reformed criminal after all.

Soon, Charlie’s immersed in a whirlwind of international espionage that takes her from the hip streets of Sydney to the majestic Great Barrier Reef and the wild, desolate outback. A dangerous trap’s being set, but how will Charlie protect herself and prevent a tragic betrayal, when she can’t even sort out what her heart’s telling her?


Check out the rest of the Crime Royalty Romance Series on Goodreads HERE.