J. S. Cooper was born in London, England and moved to Florida her last year of high school. After completing law school at the University of Iowa (from the sunshine to cold) she moved to Los Angeles to work for a Literacy non profit as an Americorp Vista. She then moved to New York to study the History of Education at Columbia University and took a job at a workers rights non profit upon graduation. 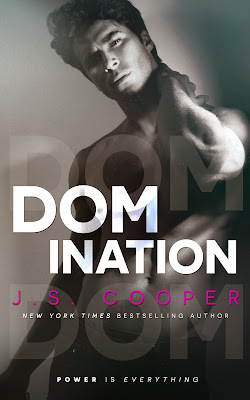 
Domination is a new book coming from New York Times Bestselling Author J. S. Cooper. Check out the awesome cover below!! Domination will be released on September 22nd, 2015.

She made him lose control.

To Titus Brooks, power was everything. He lived his life confidently and recklessly, never letting a day go by where he didn't exercise some form of control. He was handsome, he was rich, he was a player. That's all he cared for people to know. He didn't want them finding out his real story.

Savannah Corey was a flash of lightning in his life. She was dangerous. She came too close. She didn't know her boundaries. She didn't care about his. She was capricious, feisty and sexy as hell and she drove him crazy. That's why Titus had to teach her a lesson. He couldn't allow her to make him lose control.