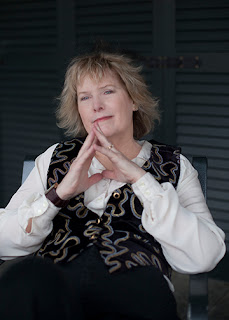 Having to wear glasses in elementary school can scar a person for life.

Dubbed a nerd at an early age, Cherise Sinclair has been trying to live up to the stereotype ever since. And what better way than being an author?

Cherise lives in the Pacific Northwest with her husband. Their two fledglings have left the nest recently to try their wings and hopefully will fly high and strong. The “ascendant erotica queen” (Rolling Stone Magazine) now spends her days writing with occasional supervision from a sadistic calico cat.


Excerpt from Servicing the Target:

Benjamin had grown up on New York streets, caring for his mother and sisters. He’d joined the U.S. Army to protect his country and moved into the Rangers to do an even better job. Anne might be the Dominant, but this soldier operated under his own priorities.

Zachary did the same.

“Should I sign you up for membership in the club?” he asked in a flanking maneuver.

“Sh*t.” Benjamin choked on his beer and coughed. “Ah, no. That’d be like pulling the trigger before aiming.”

“I see.” What he could also see wasthat Benjamin had, indeed, enjoyed the session and wanted more.

As the Domme, Anne had the next move. She’d apparently not made one.

These weren’t two people he’d have predicted to be a good match, but their scene on Saturday had held tremendous energy and chemistry. They’d been caught up in each other.

Normally a good thing. But…

Z regarded his glass, seeing the reflection of the lightning in the amber liquid. Although the scene in the Shadowlands had shown that Benjamin was sexually submissive, he didn’t possess a slave’s mentality, and it was doubtful the man could adapt to that lifestyle.

He doubted if Anne would even allow Ben to try.

Z looked up. “Mistress Anne is one of the finest Dominants I’ve ever met. She is also exceptionally reserved. Her slaves don’t live with her. Her control when she is with them is absolute. She picks her ‘boys’ carefully and they worship the ground she walks on. I’m not sure—”

“I’m not her type. I knew that.” Ben’s jaw was firm. “And you delivered your warning.” “I’m not finished. If a submissive isn’t her slave, she might play with him in the club. Once or twice.” “Right.” “She’s also a sadist.”

“I do know that”—Ben held up his hand—“and I know she went lightly on me last week.” 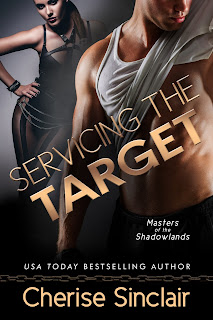 Now, he’s set his sights on the beautiful Shadowlands Mistress. Maybe he’d considered himself vanilla, but she can put her stiletto on his chest any day, any time. He’ll trust her delicate hands to hold his heart. And if she wants to whip his ass on the way to an outstanding climax, he’s just fine with that too.

Sure, he knows she likes “pretty boy” slaves. And he’s older. Craggy and rough. And six-five. Minor hindrances. The mission is a go.


SERVICING THE TARGET will be on sale for only $2.99 for the first week of sale!!


Check out the rest of the Masters of the Shadowlands Series on Goodreads HERE.