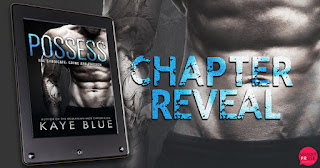 
NOTE: The following excerpt is appropriate for readers 18 years and older.

He stepped over the first body, careful to avoid the blood that pooled around it.

It was best not to make a mess, but as he looked around the room, his disgust rising with every passing second, he was reminded that the man who had come here before him not only had no concerns about making a mess, he reveled in doing so.

He looked around the room again, his face muscles twisting with his displeasure at what he saw. A small, tidy family room, pictures on the wall, a TV in one corner. The TV still played, but the screen was dimmed by the splattered blood that covered it.

He moved deeper into the house and maneuvered around the woman who lay in the middle of the floor. He didn’t have to look closely to know that she, like the man at the door, was dead, so after a brief glimpse at her stiff, glassy-eyed face, he turned his attention to the scene unfolding in front of him.

“Get out here, you little bitch!”

He face muscles twisting even more, he focused on the man who had bellowed those words in a voice that vibrated with rage, menace, and more than a hint of excitement.

Santo Carmelli had centered himself in the narrow hallway, blocking any chance of exit. He was also frothing at the mouth, his entire body seeming to expand with rage—and anticipation—with each breath he took.

No different than usual, except now that Santo had had a taste of the violence he seemed to feed on, he wouldn’t be satisfied until he’d had his fill. And when Santo was like this, the two he’d already killed wouldn’t be nearly enough.

“No more, Santo. Let’s go,” Maxim said, keeping his voice calm, disinterested, and not letting his irritation come through, difficult as it was to hide it.

If Santo heard, he gave no indication, too far gone in the bloodlust that made him so valued by his superiors and such a pain in Maxim’s ass.

Santo let out an animalistic growl and began stomping down the hallway, uncaring of the gore that coated his shoes and hands.

Maxim didn’t follow immediately, and instead debated whether he should just end this now.

Santo, never a reasonable man, had gotten worse. Much worse. And it always fell on Maxim to clean up his messes, a task Maxim had more than tired of, a task made that much worse by Santo’s sloppiness and his inability to think when he was like this.

Maxim lifted his hand to the small but lethally sharp knife he kept in his waistband.

Finally being rid of Santo would be a relief, and would allow him to focus on more pressing issues. Santo was so distracted it would be easy to get close. Two quick slashes, and one of Maxim’s biggest annoyances and biggest potential rivals would be eliminated.

A tempting prospect, but one Maxim disregarded.

He was close, and all the pieces he needed for his takeover were in place. In a few weeks, the Syndicate would be his.

Then he’d deal with the Santo problem.

“Santo,” he said, still calm, tone not betraying how close he’d been to ending Santo’s life.

His voice must have penetrated Santo’s blind rage, for he turned and looked at Maxim.

“I can see that,” Maxim replied. “Busy and too fucking crazy to do this right. Go now, Santo.” He shook his head. “No fucking way. She’s back there somewhere trying to hide from me.” As Santo spoke, he glared down the hallway, yelling even louder. Then, he looked back at Maxim, eyes wild with uncontrolled rage. “You think I’m letting this go? That bitch scratched me!” he said, gesturing at the gouges that marked his arms.

Santo probably hadn’t even felt it, but it was good that she’d fought back. Doing so had only pissed Santo off more, and only made Maxim’s already hard job harder, but Maxim didn’t care. A few scratches were nothing, but Maxim would welcome any victory against Santo, no matter how small and symbolic or how much it inconvenienced him.

“I’ll take care of it, Santo,” Maxim said, holding the other man’s gaze.

They were equals in the Syndicate, at least in name, and Maxim had no real authority to give orders, at least not yet. But while Maxim had no official authority over Santo, he had clout, influence, and support that Santo, despite how valued he was by certain members of leadership, did not. And even when he was like this, caught up in his rage and little else, Santo knew that.

Santo’s breath began to smooth out, some of the minuscule reason he had clearing the rage in his eyes. He finally nodded. “You’re better at this than me anyway. Make it hurt,” he said as he brushed past Maxim and down the hall.

Maxim couldn’t really argue with Santo’s words. He was better, but he wasn’t a mad dog like Santo and he didn’t relish the idea of making someone suffer without good cause, wouldn’t do so simply because Santo had demanded it.

Once Santo was out of the house, Maxim began moving, only barely listening as the others who had entered began to clean the living room, instead focused on the hallway.

Three doors, all partially ajar, darkness spilling out from them.

Two bedrooms and a bathroom, Maxim assumed based on the layout common for houses in this area. This wasn’t the first time he’d been in a place like this, hunting for a person who’d had the misfortune of crossing the Syndicate’s, or Santo’s, path.

A shame, but a part of the job.

Maxim looked down the hall and quickly dismissed the door at the far end. If Maxim was right, and he’d been in this scenario far too many times to be anything else, the person Santo was chasing had planned to slip out behind him as he thrashed through the other rooms. So going to the far door wouldn’t give them the opportunity to get past him.

Which left the second bedroom or bathroom.

The bedroom offered more places to hide, like the closets people were so fond of. But the bathroom had its own benefits. A window that might serve as an alternate escape, and all kinds of chemicals and cleaners that could do some damage if it came to that.

The scratches on Santo’s arms, the fact that she had gotten away, proved Santo’s prey was a fighter, so Maxim turned into the bathroom and pulled the floral shower curtain aside.

The girl was younger than him, twenty, maybe, and as he’d suspected, clutching a spray bottle of bleach so tightly that her brown fingers were turning white at the knuckles.

Her grip was so tight that it took a moment for her to react, but she did, loosening her hold and then squeezing the nozzle on the spray bottle. Her movements were jerky, panicked, and her aim was off, so the spray flew over Maxim’s shoulder and landed harmlessly behind him.

He glared at her, and her eyes widened but the rest of her body went stiff as she froze in place, staring back at him. Maxim watched her for a moment, two, saw as she debated whether to try to spray him again, saw her fingers twitch around the nozzle as she weighed the consequences of action or inaction.

Saw when she tightened her grip on the bottle.

She met his eyes, and Maxim stared back at her, curious as to what she would do. It felt like the longest time, but in reality it was only seconds. Long enough for Maxim to see that his perception of her as a fighter was true, and long enough for him to tire of their little standoff.

He pried the bottle from her hand and dropped it to the floor, staring at her, considering.

Her eyes were glassy and wet with unshed tears, but tears had long since lost the power to sway him. Maxim couldn’t say for sure if they ever actually had.

He watched her for a moment longer, unmoving. Everything he knew said he should have reached for his knife.

Instead he grabbed the hand that had been holding the bleach and pulled her out of the shower.

She stared up at him, blinking rapidly, and Maxim could see the beat of her pulse at the base of her throat.

“Are you going to k-kill me?” she asked in a low whisper.

No witnesses. No loose ends. She was both.

The answer was easy.

Maxim looked at her eyes again and then shook his head. 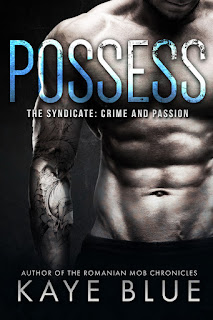 No weakness.
Maxim has stayed alive—and on top—for twenty years through a ruthless combination of brains and brutality. He’s grown the Syndicate into one of the world’s most powerful criminal enterprises.

He cares for no one.

The woman he never should have saved…the one who holds the remnants of his long-dead heart.

No limits.
Senna doesn’t know why Maxim spared her all those years ago, or why he’s kept her by his side. But she does know that nothing—not his beautiful cruelty, not the black void where his heart should be—can stop her from loving him. Wanting him.

Even though she shouldn’t.

No turning back.
Years of obsession sharpen to a knife’s edge when Senna begins to crave her freedom. And when an old rival discovers her existence, Maxim must fight to keep her alive, even as he battles his need to possess her completely…no matter the cost.