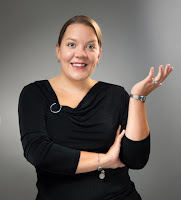 Elizabeth Varlet is a nerd at heart and spends way too many hours binging on episodes of her favorite television shows. If you love Doctor Who, Supernatural, Stargate, Star Trek, Sherlock, or Firefly you are already her best friend.

She started writing stories in high school and hasn’t stopped. Now, her characters like to get frisky under the covers – or the stars, they’re not picky. She’s a thirty-something, newly married, world traveler who devours books like they were candy.

How long did it take you to write Fierce and Fabulous? Did you have any stumbling or writer's block while writing?

Hello! And thank you for having me here on Read My Mind. I’m thrilled to tell you about my writing process and how long Fierce & Fabulous took from conception to finished product.

Fierce & Fabulous was actually my 2014 NaNoWriMo (National Novel Writing Month) novel so I managed to write most of it in one month (November). Though, I admit, the last few chapters took me longer mostly because I struggled with the deep emotions that the characters needed to work through towards the end of the novel.

I wouldn’t say I had writer’s block with this book. Ansel’s voice and motivations were so strong I always knew what was going to happen, but because of this I wanted to get his character right. It’s sometimes difficult to translate those imaginings & visceral emotions into text. In contrast, Dark & Dazzling was much more difficult for me to write and I did have a few instances where I stumbled because Z is quite mysterious and brooding.

I had a finished and polished draft of Fierce & Fabulous at the end of January 2015.

After that, I sent it to a handful of writer friends for critique. They gave me a lot of wonderful notes and I spent another several months editing. By March of 2015 I was ready to send the MS to agents. Anyone familiar with this process knows it’s basically a lot of waiting around and handling disappointment. This was no different. None of the agents I queried were prepared to sign me, so I moved on and began querying publishers directly.

This is where my luck changed. I got several offers, but the first and most enthusiastic was from Carina Press so I eventually signed with them for the first two books in the Sassy Boyz series and I could not be happier.

It took me a while to really like this book because I'm not a big fan of insta-lust/love, but what turned it around were the characters and their individual development, as well as the pacing and ending of the story. While I really couldn't say for sure if the characters were authentic or not, since I'm not a gay or bisexual man, they read as realistic and I could commiserate with their situations, despite not having experienced it personally. Both Ansel and Fitch had their flaws, which certainly makes it easier for me as a reader to empathize with who they are and why they do what they do. I really dislike reading about perfect characters with no problems because they aren't someone I can identify with, regardless of gender.

There's plenty of sex scenes in this book and author Varlet has managed to make them hot and sexy without going overboard. I liked how, even though Fitch was the one who was inexperienced in gay sex, he brought about a change in how Ansel connected with him during intimate moments, as compared to Ansel's past encounters with other men.

My only con with Fierce and Fabulous is the Gay For You (GFY) element because I'm not sure that I believe in GFY. I think that most people establish relationships with people based on attraction, and that Fitch clearly had just never encountered a male he was attracted to. But this doesn't equate to GFY, he's just a bisexual male who had only had relationships with women in the past. Fitch also seemed to adapt to having gay sex very easily for someone who had never participated in it before. I found that a little unbelievable, regardless of how attracted to Ansel he was.

Overall though, I enjoyed reading Fierce and Fabulous. This is a definite recommendation to readers who enjoy gay romance! The characters have an intense connection to each other despite their struggles and conflict. 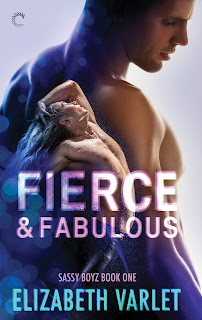 Fans of Heidi Cullinan will devour this scorching new male/male series by Elizabeth Varlet. Behind the Sassy Boyz's seductive smiles and sinful dance moves are desires that will leave readers breathless.

Fitch Donovan never thought a lap dance could change his life, but from the moment the gorgeous dancer's lips touch his, his world comes screeching to a halt. No matter how hard he tries, he can't shake the desire that rocks him to his core. He's longed for this passion all his life—he just never dreamed he'd find it with another man.

Sharing a soul-shaking kiss with a straight boy is the kind of drama Ansel Becke just doesn't need. Spotlights aren't made for two and Ansel prefers to keep things on a one-night-only basis. So when Fitch shows up asking for an encore, Ansel knows he should send his gorgeous ass packing.

Though Ansel tries to pretend that what's between him and Fitch is far from fabulous, there's something about the big, burly contractor that makes Ansel's world sparkle in a way no amount of glitter ever could. And Fitch will do whatever it takes to convince Ansel that when the thing you need most in the world falls right into your lap, you'd be a fool to let it go.