Best Seller for a Day: Irish Moon by Amber Scott

Series: none
Source: Author, no other compensation given for honest review 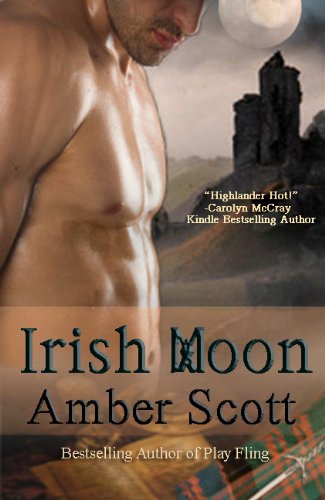 From Good Reads:
Druid Magick... Breanne grapples with the old ways, her mentor murdered before she masters her talents. The stranger washed ashore must be the key to proving murder.
Knight Errant... Ashlon made a vow to bury the Bloodstone, it's horrific past, it's secrets, in the farthest reaches of Ireland.
Fate's Twisted Course... Passion binds them but betrayal will test every belief under an Irish Moon.

My Review:
IRISH MOON has mystery and romance, in a historical setting that I don't spend nearly enough time reading. Breanne, Ashlon, and the rest of Amber Scott's cast of characters, exist in 1300's Ireland. Breanne has had magic training, and when her mentor is found dead, she must figure out who killed him, and why.

I think it is safe to say that this is a paranormal romance, but a lite version. More like magical realism, in that there are paranormal elements, but in a largely historical setting, where the magic is peppered into the story and becomes part of the plot, not the central vision. I like that IRISH MOON has much to do with the mystery and the developing relationship of the main characters, Breanne and Ashlon. It's safe to say that I really enjoyed following their relationship.

Though, Breanne is unsure at first, about Ashlon's part in her mentor Heremon's death, she can't help the attraction that she feels on first sight of him...and neither can Ashlon. But, what makes their story so likeable is that Scott doesn't try to sell it as a love at first sight. Yes, they feel an attraction, but as with the magical aspect, it doesn't become the only facet of the plot.

I just had a good time reading IRISH MOON. I was able to immerse myself into the world that Scott created. I don't spend that much time reading about 14th century Ireland, but the dialog, the description of the setting, and the way the interpersonal relationships were conducted, all ring true. The result is a delightful highland tale that will catch the attention of readers who enjoy the mix of Irish history, mystery, magic, romance and suspense.

Help Amber Scott move up the Amazon bestseller charts by buying IRISH MOON for only $.99 today, March 16th, only.