About the Author: E. Kelly lives with her husband and teenage daughter in eastern Maryland. She is an amateur chef and a zealous reader. She confesses that often she would rather read than eat. In literature, as well as in life, she prefers the company of women who are intelligent, strong, and fiercely independent.
Find E. Kelly: On Facebook

RMM: When you decided to self-publish, had you already tried the traditional publishing route and become frustrated, or considering the relative success of more "indie" authors, thought that it was a viable alternative, which would find an audience for BRONWYN'S STAND?


EK: In order to answer this question, I have to first admit that the story of Bronwyn and Vincent had lived inside my head for roughly twenty years before I even attempted to write it down. I was a reading teacher and a reader. The only thing I had ever written before was poetry. Could I actually capture the story in my head? Six months of writing and revising, and I was pleased with the result. Still, it never occurred to me to publish, until a friend suggested it. She had self-published a few educational books in her native country, the Philippines.
So I began to research my options. I learned that with traditional publishing, I would have to write a query letter and submit it to a literary agent. IF the agent decided to represent me, he/she would then present my work to publishing houses for possible publication. The entire process takes months. And, the average agent rejects the MAJORITY of the work sent to them. The statistical probability of getting through the publishing process successfully was highly unlikely.
At this point, I had become so emotionally invested that I honestly couldn’t handle the idea of never holding Bronwyn’s Stand in my hands.
So… cue the research on self-publishing. I realized that with only a small investment upfront, I could publish my book. No one would tell me ‘no’. No one would tell me it wasn’t good enough to print. I was ridiculously excited! And, although my first self-publishing experience was not a smooth one, I did achieve my goal. I can now hold Bronwyn’s Stand in my hands. Like a real book. LOL!
I was so pleased with the process, that I am self-publishing two more books this year. I did send out approximately 75 query letters regarding Anna’s Strength (the sequel to Bronwyn’s Stand) to a variety of agents. A few did respond positively, asking to read the first 50 pages, and I’m waiting. But every step of the traditional publishing process takes months.
That, in combination with the increasing success of e-authors, and I’ve concluded that for me, for now, self-publishing is more rewarding. I like maintaining control of the cover and interior layouts, distribution, and sales and marketing packages. With self-publishing, I was able to find an audience for Bronwyn’s Stand quickly. It has given me the courage and the means to continue to pursue my writing.

Thanks, E. Kelly! Here's a little more about her novel. 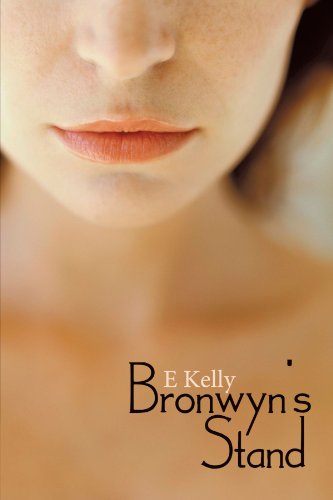 From Good Reads:
Bronwyn Barrister has her life in order. She has loyal friends, a successful business, and a family who loves her beyond measure. She has everything she has ever had the courage to dream for. One man, however, has begun to threaten it all. She sent him to prison for eleven years, but now he's free to exact his revenge upon her. With menacing phone calls and vile threats, he stalks her. He is a monster from her past, the past she tries to hide.

When Vincent Lane and his team are hired by Bronwyn's uncle to keep her safe, he finds himself drawn in by her beauty, strength, and wicked intelligence. And when he allows himself to look beyond the surface, he discovers the woman behind the defenses; a woman who strips him bare and makes him want more than he has ever wanted in his life. As the stalking and danger escalates to arson, Vincent is torn between ecstasy and terror. He must find a way to stop this madman before it's too late.