Series: none
Source: Author, no other compensation given for an honest review 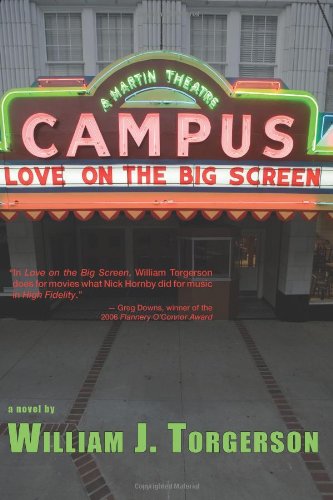 From Good Reads:
Meet Zuke, a college freshman whose understanding of love has been shaped by late-eighties romantic comedies, and who attends a school so strict it's against the rules to go to the movies. Zuke and his buddies, separated from the women on campus and forced to entertain themselves, form a club called the Brothers in Pursuit, which holds weekly meetings during which all the members dress in matching and embroidered boxer shorts, stand at attention to Cyndi Lauper's "True Colors," and report back to one another on their objectives: God,
knowledge, compassion, and women. Love on the Big Screen is a novel of friendship, the dangers of romanticized love, the complexities of faith and real life, and what happens to one young man as he finds out that life is nothing like the movies he loves.


My Review:
I had the chance to meet the author of LOVE ON THE BIG SCREEN, William J. Torgerson, at the Book Blogger Convention this past May. I'm not going to lie, how he was able to sum up his book, as well as speak intelligently without sounding like outright pitching really went a long way toward my decision to request a review copy. The blurb did the rest.

Having grown up with the same understanding of how Zuke was influenced by the Brat Pack (and other) movies of the 80's, I had no trouble connecting with this character. Torgerson tells his story in a way that is engaging and absorbing. The reader is given a glimpse into the life of a college male that actually seems to believe in love... because that's what the movies always show.

Torgerson opens up the male psyche with his creation of Zuke and the Brothers In Pursuit. The relationships that form between Zuke and his friends as they attempt their "quest" gave me, as a female reader, a very refreshing look behind the usual postering, alpha male behavior that we are usually subject to between the pages and in real life.

The best part about LOVE ON THE BIG SCREEN is that it explores some heavier themes: heartbreak, love, exploration, faith, and the search for enlightenment, but even still, I really had fun reading it. I wasn't bogged down in too much existential ponderings that it took me out of the story, or stopped me from enjoying the ride. I would go so far as to say that LOVE ON THE BIG SCREEN was a perfect book to read for the summer, because I was able to reminisce about my youth as I was reading, and it provided an entertaining escape.