Series: Warriors For Light #1
Source: Bewitching Book Tours, no other compensation given for an honest review 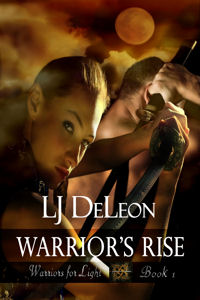 From Good Reads:
For Fae-human half-breed Deva Morgan life as she knows it changes on her thirtieth birthday. One moment she's a barkeep, the next she is a warrior fated to save Earth from the Dark Lord and his demon hoard. Shunned by both her races, she faces a danger-filled quest with few allies. Too bad her powers haven't fully emerged or stabilized.

For Deva it is life or death, on-the-job training with her companion, Padraig Neal, a Fae warrior with a shadowed past. Can he quiet the storm raging inside her, help her harness the growing power within her, and provide a barrier between Deva and a fatal outcome? Will their love be enough to save Deva and stop the Dark Lord's demons from entering Earth?

My Review:
Talk about starting off with action! WARRIOR'S RISE throws the reader straight into the world of fae, shapeshifters and demons that Deva, the primary female character lives in. Except she doesn't just have to navigate the world, she has the lead the fight against the Dark Lord as the Caidh Arm, a mystical warrior leader. I loved the way that Deva is introduced. Padraig (which, if I'm not mistaken, is pronounced almost identically to Patrick), a warrior in his own right, teams up with her and her shapeshifter guards to take out some bad guys.

Teams up is exactly the right phrase, too. L.J. DeLeon has written a partnership with her hero/heroine duo. Though Deva has always had her shapeshifter protectors (you could say that she was raised by wolves), she is an awesome warrior in her own right. In fact, throughout the book, Deva racks up a pretty impressive demon body count thanks to her training and powers. Padraig is neither too alpha, nor too beta. He's just the right compliment to Deva, not acting the typical "you stay and hide, while I kill the baddies" male paranormal hero.

WARRIOR'S RISE had a really good combination of elements that had me enjoying different aspects of a paranormal/fantasy novel. Much of the book is Deva, Padraig, and her team on the move, trying to out-run all of the creatures that the Dark Lord and his "minion" Sabina, throw at them. However, what makes it so smart is that there is a good amount of strategic planning, military structure and dialog to balance out the intense action and danger. I thought the inclusion of governmental personnel and diplomatic talk really enhanced the plot.

What DeLeon has done is introduced a more unique adventure novel with paranormal and fantasy aspects. WARRIOR'S RISE does have a nice romance between Deva and Padraig, but it develops organically throughout the book, not all at once at the beginning. And, the focus stays on the action part, which was a big plus, for me.

I could see any reader who loves romantic suspense, military, or action adventure reads, but is a newcomer to either paranormal or fantasy would enjoy this book. While the romance isn't the focus of the book, it should appeal to paranormal romance fans, as well as fantasy readers. Honestly, anyone who enjoys genre fiction should find something in WARRIOR'S RISE to ring their bell.