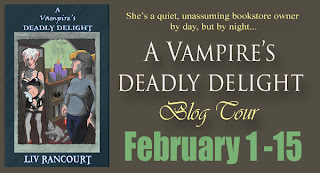 I'd like to welcome Liv Rancourt to Read My Mind today. For her blog tour, sponsored by Bookish Snob Promotions, Liv has kindly provided an excerpt from her book, A VAMPIRE'S DEADLY DELIGHT! 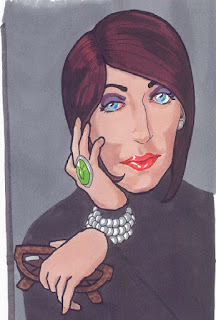 About The Author:
Liv Rancourt is a writer of speculative fiction and romance. She lives in Seattle with her husband, two teenagers, two cats and one wayward puppy. Writing stories that have happy endings is a good way to balance her work in the neonatal intensive care unit, and she is thrilled to be publishing her first novella with Black Opal Books.
Website | Blog | Twitter | GoodReads | Facebook

Excerpt:
There’s nothing more fun than killing a vampire…maybe…
“Better.”
In that one word I heard his tension, saw the wooden rigidity of his arms. Yeah, he wanted me. He wanted me bad. This one was strong. And old. As we stood, taking each other’s measure, I could sense the power of his years on Earth. Woo baby, I’d never done one this old. Wasn’t going to stop me, though. I reached for the short sword I kept in a sheath that was strapped to my thigh.
“Sorry we don’t have time to catch up, Shakespeare baby,” I said as I raised the blade I called Mr. Sticky. I imagined pressing it to his chest, making a quick slice up his sternum, right turn across his ribs, then back to make sure I got through his great vessels, the aorta and the vena cava. His heart would be mine. Too easy.
“Jai,” he breathed.
I stood frozen in place, my normal protection against a vampire’s vibe completely gone. They usually don’t scare me. He did. He was so old, so powerful.
Pausing is always a mistake. It gave me time to really look at him. There was something warm, something good, worked into him, one golden thread in the blackened weave of his being. All I usually saw in a vampire was dead—bone and muscle, sinew and dust. This one was different. I didn’t put Mr. Sticky away. I didn’t go for his heart, either.
It was Vivienne who blinked first. She threw the candle at the bed then dove between me and the vampire. He grabbed at her hair. I heard a snap and saw her crumple to the floor, her neck making an awkward L-shaped curve, her head at an impossible angle to her shoulder. The candle went out and before I could respond I felt the vampire leave.
Jai faded and Kristen came back.

Thanks for the sneak peek, Liv!


Readers, be sure to check out the next stop on the tour on February 10th: Stitch, Read, Cook.

Visit Liv Rancourt's website on February 15th for the final stop and a fantastic giveaway.

Come back to Read My Mind on Monday, February 13th for my review. 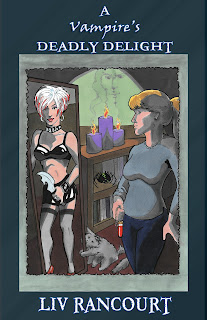 Kristen has a deadly secret—when she smells a vampire, she turns into Jai, a beauti-licious babe who makes vamps permanently dead. To a vamp, Jai is like ambrosia. They can’t resist her. She uses this attraction, plus her super strength and her trusty blade, Mr. Sticky, to end their undead lives. The thrill of wearing miniskirts without worrying about cellulite stifles any qualms Kristen might have about killing the undead. Being Jai is the most fun she has ever had—until they come up against the one vampire Jai can’t kill. If he and Jai have a history, as he claims, Jai can’t remember it...or him.

But when her work catches the attention of some old enemies—who won’t hesitate to destroy Kristen if it also means the end of Jai—this vampire may be their only hope. Can Kristen and Jai learn to tell the difference between good and evil in time to defeat Jai’s ancient nemesis? Or will being Jai’s hostess cost Kristen more than just a little sleep?