I'm happy to feature a new publishing company on the YA scene. Month9 Books launched October 2012, with TWO AND TWENTY DARK TALES, a dark and twisted retelling of fairytale rhymes from 22 YA authors. 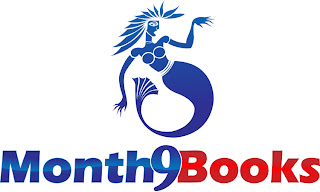 About Month9 Books:
Month 9 Books is a publisher of speculative fiction for teens and tweens... where nothing is as it seems. Month9Books will donate proceeds from each of its annual charity anthologies to a deserving charity. Individually, authors may donate his or her advances and royalties to a charitable organization. Month9Books will also release 10-12 non-charitable titles annually. TWO AND TWENTY DARK TALES: DARK RETELLINGS OF MOTHER GOOSE RHYMES is Month9Books’s first release. Month9Books is distributed by Small Press United, a division of IPG. 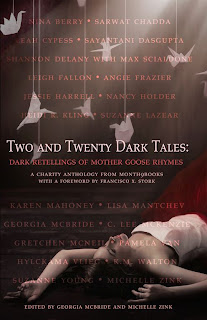 About TWO AND TWENTY DARK TALES:

Fairy tales sung sweetly can take us back to childhood, but just beneath those same sweet tales, is a hint of something dark…

When asked why they wanted to be a part of TWO AND TWENTY DARK TALES: DARK RETELLINGS of MOTHER GOOSE RHYMES, the authors had a lot to say!

“I'm so excited to be working on Month9Books's epic anthology. I've been a Tudor© nerd since before the Tudors© were cool, and this nursery rhyme is about the accession of the Scottish king, James VI, to the English throne (as James I.)” -- New York Times Bestselling author, Nancy Holder

"As soon as I heard the anthology's theme, I knew there was no stopping me! I love anything to do with folklore, so immediately latched onto 'One for Sorrow' as my story's basis. I've wanted to write a crow story for a long time, and this was the perfect excuse!" -- Karen Mahoney, author of The Iron Witch and The Wood Queen, Flux Books


Month9 Books has kindly offered a giveaway of THE IRON WITCH by Karen Mahoney for Read My Mind during the tour! Just enter via the rafflecopter below, and be sure to leave a blog post comment answering the question on the rafflecopter for your entry to count.

Rules:
Must be 13+ to enter
One entry per person/email
INTERNATIONAL!
Ends November 4th, 11:59pm