Promo: Under His Skin by Sidney Bristol w/ Giveaway 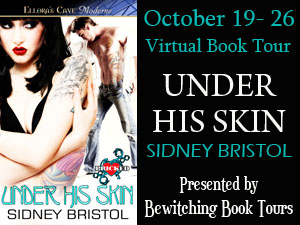 Thanks to Sidney Bristol and Bewitching Book Tours, Read My Mind has a promo and giveaway for Sidney's UNDER HIS SKIN, a tantalizing romance with a tattoo parlor as the setting. 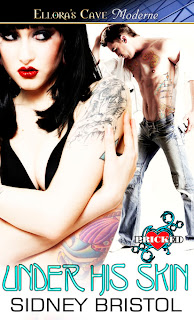 Blurb:
A woman who doesn’t believe she deserves love...

Toe-curling kisses and enough sex to fill a weekend were all Pandora wanted from a fling with her teenage crush. She’s never forgotten how he played the knight in shining armor to her damsel in distress. She’s ready to say thank you in several naughty ways, so long as she can walk away when it’s over with her heart intact.

A man moving on from tragedy...

Brian has no intention of allowing the feisty tattoo artist to leave after one taste. He hasn’t had enough of her inked curves. The packaging might have changed, but Pandy is the woman he hasn’t been able to excise from his memory. He’s ready to put together a new life, one that includes her.

But Brian isn’t the only one vying for Pandora’s attention. Someone else wants her, dead or alive. 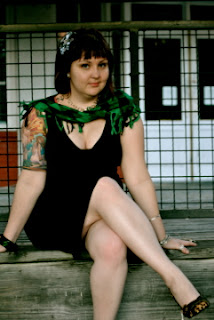 About The Author:
It can never be said that Sidney Bristol has had a ‘normal’ life. She is a recovering roller derby queen, former missionary, and tattoo addict. She grew up in a motor-home on the US highways (with an occasional jaunt into Canada and Mexico), traveling the rodeo circuit with her parents. Sidney has lived abroad in both Russia and Thailand, working with children and teenagers. She now lives in Texas where she splits her time between a job she loves, writing, reading and belly dancing.


Here's a little taste of UNDER HIS SKIN!


“I think I’m going to be sick,” she muttered into his t-shirt.

He said something she didn’t hear and took her hand. As Butch began acquainting the audience with one of the smaller contests, Brian led her through the press of people crammed into the ballroom. Focusing on putting one foot in front of the other, she didn’t question why she was following him. It was nice not to have to sit at the bar by herself. She hadn’t yet been able to face the other girls after her public disqualification. Escaping with Brian was preferable to the alternative.

Exiting from the ballroom-turned-bar, she sucked in a deep breath and squinted in the bright lights of the lobby. Brian kept a firm grasp on her hand, leading her across the foyer to a comfortable nook with contemporary leather lounge seating built against the walls. He pushed her down onto the edge of one of the couches and hovered.

Pandora cradled her face in her hands, her elbows two painful points digging into her knees.

“Can I get you anything?”

“I think you are. How about some water?”

“This is tipsy, not drunk.”

Where the ballroom had become stifling with the press of bodies and the pulsing music, the foyer was cool and the music at least muted. She wanted to drink away today, but it would require a greater amount of alcohol than she’d consumed to do more than make her a little loose.

Her gaze focused on Brian’s worn Converse, the way each shoe sported twin worn spots behind the rubber toe where the shoe would crease when he knelt.

“Hey.” The shoes creased and his right knee hit the ground.

Sighing, she straightened and pushed her hair over her shoulder. She’d curled it for nothing. “I’m fine. A little dramatic, but I’ll be okay.”

She whipped her head around and glared at Robert, flanked by her former coworker Juan and a man she didn’t recognize. He had his thumbs hooked into his belt and glared at Brian. She hated how often Robert said her name.

“Fuck off, Robert.” Her voice lacked the heat, the fiery quality of her hatred for him. It took effort to be that mad, and she was beaten down enough not to care.
“Slumming for a new boyfriend, Pandora?”

Her blood boiled. Shoving to her feet, she took two steps toward Robert, jabbing her finger at him. “What? Or go back to being with you? No thank you.”

“Hey.” Brian stepped in front of her, blocking her view. “Back off.”

She peeked over Brian’s shoulders. Robert’s face had transformed from his typical, cocky grin to full-on crazy. His eyes glinted, the pupils larger, his nostrils flared and color high in his cheeks. All he needed was a vein popping out of his forehead to complete the picture. She’d seen him like this before, and he’d demolished a Vespa because it was in the spot where he usually parked.

“Or what?” he said in a low voice that had goose bumps breaking out down her arms.
Looping an arm around Brian’s chest, she pulled him back. She didn’t know what Robert would do, but he was crazy and getting into it with him was not how she wanted to spend the night.

“Let’s just go, please?” She pressed her front to his back, her hand splayed over his stomach. She wasn’t tipsy anymore.

He flattened his hand over hers, rubbing his fingers across her knuckles.

Robert turned his head to acknowledge someone calling his name. Pandora took advantage of the distraction to grab Brian’s hand and lead him to the bank of elevators. She pressed the button and allowed him to push her into the first available lift. She tottered to the far wall, grabbed hold of the bar mounted at hip height and faced the glass. She liked to watch the ground drop away suddenly, as if she were flying. At the first pull of gravity as the elevator rose, her stomach rolled and protested.

She glanced over her shoulder and nodded. “Yeah.”

Leaning back, her back hit his chest. Brian paused and she thought he would step away from her, but he wrapped his arms around her waist. Allowing her eyes to shut intensified the disorientation, but Brian steadied her.

His breath was warm against her neck. “You did.”

“Yeah, well I almost married him. For some reason I get away with fighting with him. I think he likes it. But you? I think he would go berserk.” She knew he would. Though she hadn’t seen it happen to a person, Robert was one small step away from making that leap.

“You were going to marry him?” The disbelieving growl surprised her.

She looked over her shoulder, wanting to soothe her hero. “I was in a bad place the last year I worked for him. I’m not proud of who I was then, and I regret every second I was engaged to that deranged, self-centered dipshit.”

His features relaxed and he leaned against her. Their breath mingled, scented with vanilla and brandy. She could kiss him right now. He squeezed her hip and circled her waist with his other arm to splay his hand over her stomach. The press of gravity lessened as the lift slowed to a stop.

“Where are we going?”

She shrugged. “I already checked out of my room.”

“This is my floor. Come on. I can get you some water.”

They walked hand in hand down the hall, with its pretentious gold-plated sconces and busy patterned carpet. They could be any couple returning to their room together for the night. Brian led her into one of the rooms not far from the elevator, swiped his card and pushed her in ahead of him. The darkness swathing the room was comforting, easier on her eyes. Even when he flipped the lights on, bathing the room in a muted glow, it was better than the harsh glare downstairs. Besides a suitcase sitting on the desk, there wasn’t any evidence he was staying in the room.

She turned to face him. It was like being eighteen again and going back into the piercing room to make out with him, only this time it was actually Brian. As if to remind her it wasn’t a dream, his hand brushed her arm.

Flinching away from the touch, she headed for the armchair next to the window and sank down in it. The curtains blocked out all but two lines of light at the top and bottom. Closing her eyes, she tried not to listen to the rasp of his jeans as Brian walked across the room, following the path she’d taken but much slower. She could hear his breathing and smell the cologne that had rubbed off on her skin the day before. Dropping her head back against the chair, she dug her fingers into the armrest to give them something to do.

Brian was not Robert. He wasn’t like the guy kicked out of his band. He wouldn’t hurt her, at least not physically. But neither was he the kind of guy that dated a girl like her.

Large hands grasped her knees, his thumbs swiping over the fishnets that were already slicing into her toes.

The gentle word might as well have been a command. Prying one eye open, she looked at him kneeling in front of her.

He appeared serious and stark without the long hair. He’d aged, and not in a bad way. “How you feeling?”

“Want some water? Something for a headache?”

The corners of his mouth turned up. “You got it.”

He left for a few moments, then came back with a glass and a package of pain relievers.

“Thanks.” She downed both, folding her hands around the glass. She held it in her lap and stared at it to keep from looking at him. “I should go back downstairs. The girls will be looking for me.” She pushed to the edge of the seat until her knees bumped his chest.

He put a hand on her thigh. She could feel the pressure from each individual finger through the sateen skirt. “Do you think Robert’s going to give you a hard time again? You don’t have to go. You can stay here for a bit.”

Lifting her gaze to his face, she searched him for some sign, some intangible something she couldn’t name. One side of her mouth hitched up and she put a hand against his arm. The muscles tensed under her fingertips. He might be scarred, but he was a strong, virile man. “Was this your plan? Get me up here and see where it goes?”

“What?” He snatched his hand back and she missed the reassuring weight of him immediately. “That’s not what this is about.” 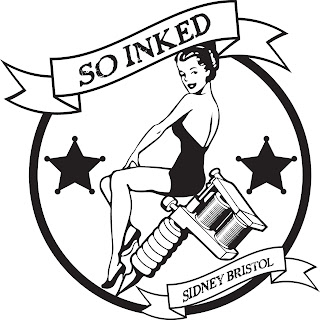 Ready for the giveaway? Sidney Bristol is offering an e-book OR print copy of UNDER HIS SKIN. Just enter via the rafflecopter below.

Rules:
Must be 18+
One entry per person
Ends November 6th, 11:59pm
Winning entry WILL BE VERIFIED