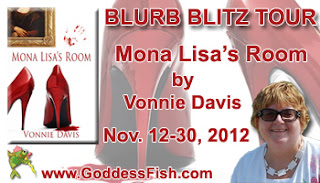 Goddess Fish Promotions is hosting a book blitz and blog tour for MONA LISA'S ROOM by Vonnie Davis. Read My Mind is participating in a gift card giveaway courtesy of the author!

Want to know more about the book?. 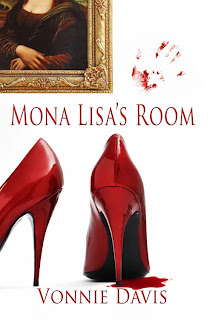 When I came to Paris for a bit of adventure, I never imagined I’d foil a bombing attempt, karate-kick two men, and run from terrorists while wearing a new pair of stilettos. I met a German musician, a gay poet from Australia, and the most delightful older French woman.

Don’t worry. I’m safe…the jury’s still out on yummy Niko, though. The more champagne I drink, the less reserved I feel. What an unforgettable fortieth birthday! 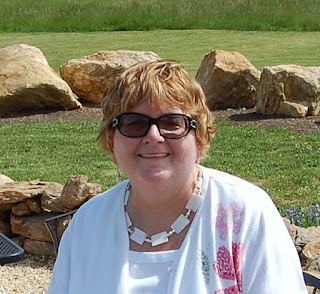 About The Author:
Vonnie Davis holds a degree in English with a concentration in technical writing from Penn State. She is retired and has traded in her technical writer’s tailored clothes for the feather boa of a romance writer.

She lives in southern Virginia with her husband, who is also a writer.

When Niko ended the mind-blowing kiss, he pulled her closer, if that were possible, and
whispered in her ear. “We’re being followed. Hold my hand and run.”

Run? Melting came to mind, but running? How could she run when he kissed her until the bones in her legs turned to jelly? Plus, she was wearing new high heels.

His arms squeezed her for an instant. “Now.”

He grabbed her hand, and they took off. They dodged throngs of pedestrians and at one point, Niko hurtled over a poodle, its protective owner shouting in French outrage, calling him a fool. “Fou! Fou! Mon chien, mon chien!”

Alyson had done her fair share of running, especially after her break up with Chaz. Running was a stress reliever; so were the Stair Master and martial arts. Still, those activities were done in sneakers or barefooted, not high heels. Stilettos, no less. Oh, and the thong. Let’s not forget the damn thong chafing her in places she didn’t want to think about. She’d kill Gwen when she got home.

“You put me in three-inch heels and expect me to run fast? You bossy Frenchman with a foot
fetish.” She stumbled, and he caught her.

“Typical woman. Kiss her once and she figures she has the right to bitch at you.” Niko’s head
turned, evidently scanning the area as they ran.

She tried jerking her arm free of his ironclad grasp. “So help me, God, if that terrorist doesn’t kill you, I will.”

He pulled her around two uniformed nannies pushing toddlers in strollers. “Promises. Promises.”

Niko quickly glanced up and down the wide tree-lined street and evidently seeing a slight break in traffic, ordered, “To the other side. Now.”

They bolted across the four-lane boulevard and its well-manicured median. Two motorbikes rumbled past, nearly hitting them. Horns blared as several Renaults and Smart Cars barreled down the street.

Niko shoved her out of the way and she fell, her hands and knees scraping on the asphalt. Brakes screeched and there was a dull thud behind her. She glanced back over her shoulder just as Niko rolled across the hood of a silver car. He never broke stride. “Run, dammit!”


“That must account for your great legs. Which reminds me—” he slid the ottoman back and picked up her foot “—I promised you a foot massage.”

Oh, good Lord. “That’s really not necessary.” His thumb pressed into the ball of her foot, and she wanted to whimper.“Your feet have taken a beating today. Running in those new high heels couldn’t have been
comfortable.”

His magic fingers rubbed and kneaded the muscles of her foot and toes. She sighed in pure
pleasure, or purred. God bless magic fingers.

“Yet you never once complained. You’re a strong woman, Aly.” He bent and placed a gentle kiss to her toes and then to the instep of her foot, as his warm hands continued kneading her flesh.

His dark head rose and chocolate eyes stared at her before he tilted his head to the side, as if
regarding every nuance of her expression. “I have so much I could teach you, cherie. You deserve to be cherished.” He bent and kissed her ankle as his large hands moved slowly up her leg, rubbing her sore calves. “Your skin is so soft. A man could die happy after touching you and feeling you respond to him. Men dream of such a reaction from a woman.” His fingertips played a sonata on her skin. Feather-light touches hummed promises. Her body sang its own sultry reply.

“Your calf muscles are tight. Did you use bath salts when you bathed?” He seemed intent on
rubbing her muscles into submission. Her womanly muscles had already succumbed by this point.

Alyson cleared her throat, hoping her voice wouldn’t give her away. “Yes. Yes, I did.”

“Good.” One warm hand slid behind her knee, slowly raising it. “Are these scrapes from when you fell this afternoon? He kissed first one and then the other, slow, sensual kisses. Oh, good Lord! How much more can I take before I haul him to me and beg him to end this thing?

His palms slowly rubbed her thighs, then stilled. “What do we have here?” A finger pushed the hem of her sleep shorts higher. “A tat?” His dark gaze swept to hers and his voice dropped to a sensual whisper. “I never imagined you would have a tattoo. You know I never cared much for butterflies—” he placed a kiss on the blue and purple butterfly “—but my opinion of them has suddenly changed.


Vonnie is also giving away a $25 GC to a random commenter tour-wide. Enter more than once at every stop to up your chances of being chosen. Just leave a comment about your dream vacation destination below to enter at Read My Mind. 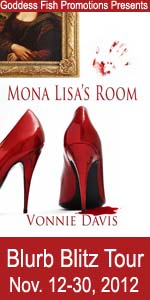