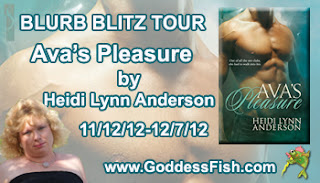 Thanks to Heidi Lynn Anderson and Goddess Fish Promotions, Read My Mind is promoting AVA'S PLEASURE today with a Gift Card Giveaway.

Here's more about the book. 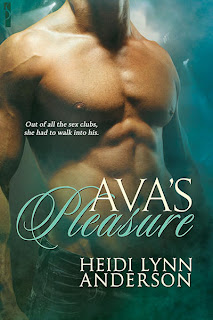 Blurb:
When prim proper Ava stumbles into a Miami sex club, she isn't expecting to find the man from her dreams. Navy SEAL Logan is just wasting time between missions until this naïve and innocent woman turns his world upside down.

Navy SEAL Logan Turner always knew he needed more out of life than the next mission. That's why he opened Paradise with his best friend Julie. It didn't hurt that he could reap the benefits of owning a sex club. That was until a sexy, doe-eyed woman walked in, making his control slip for the first time ever. 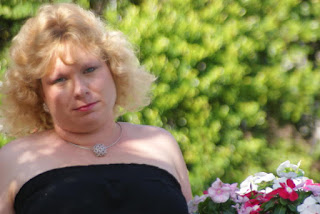 About The Author:
By day, Heidi Lynn Anderson is a wife, mother, and owner of a small Green-Cleaning company.


Check out this taste of AVA'S PLEASURE!

Nick tapped on the doorframe.

"Oh, thank God," she said under her breath.

"Honey, I have the boxes you asked for," he said, sauntering in, still wearing his fire department uniform. The navy Polo shirt and cargo pants fit him to a T.

Ava had to admit he made a hunky picture. She wondered why she didn't have the same reaction to his six foot two well-muscled frame as all her girlfriends. They all loved his kind brown eyes, boyish good looks, and underwear-model body.

Her mind flashed to the day, five years ago, when she met Nick. Her roommate dragged her to a fundraiser for the local hospital's burn unit. That night firefighters stripped down to their skivvies for a good cause.

She remembered her shock and dismay when he pulled her up on the stage and kissed her senseless. When Nick realized he'd scared her spitless, he bought her a drink and apologized--then bugged her until they were best friends. He'd been kissing her and calling her honey ever since. She loved him like an annoying brother.

He dropped the boxes next to Sister Mary Elizabeth, gave her a little wink, then continued toward Ava. Nick turned her office chair and pressed his lips to hers. She waited for the tingling feelings to start, but nothing. Not even when the tip of his tongue swiped her bottom lip. Am I dead inside?

Ava leaned back and forced a smile. "Hi, honey, thank you for coming on short notice."

Nick sat on her desk, his back to the now sputtering sister and mouthed, Nothing?

Ava grinned and shook her head. "Nick, let me introduce you to Sister Mary Elizabeth."

He winked again and stood to face the fuming woman. "Nice to meet you, Sister."

Nick must have blessed her with his charming smile, because the old nun's face twisted into a small grin. It must work on every woman on the planet--except for her.


Heidi is also giving away a $25 GC to a random commenter tour-wide. Enter more than once at every stop to up your chances of being chosen. Just leave a comment about your favorite man in uniform (fictional or real) below to enter at Read My Mind. 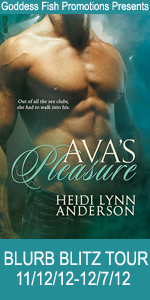