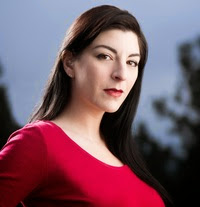 New York Times and USA Today Bestselling author Shoshanna Evers has written dozens of sexy stories, including The Man Who Holds the Whip (part of the bestselling MAKE ME anthology), Overheated, The Enslaved Trilogy, and The Pulse Trilogy (from Simon & Schuster Pocket Star).

Shoshanna is also the cofounder of SelfPubBookCovers.com, the largest selection of instantly customizable, one-of-a-kind, premade book covers in the world.

Reviewers have called Shoshanna’s writing “sensuous, delightful, and sizzling” with stories where “the plot is fresh and the pacing excellent, the emotions...real and poignant.”

Shoshanna used to work as a syndicated advice columnist and a registered nurse, but now she’s a full-time romance writer and a home-schooling mom. She lives with her family and three big dogs in Northern Idaho, and loves to connect with readers on Twitter @ShoshannaEvers, and Facebook at Shoshanna.Evers.

Sign up to be notified when the book comes out! ShoshannaEvers.com/newsletter

In The Tycoon's Convenient Bride..., Mack and Lauren, who have known each other since childhood, are thrown into a marriage of convenience when Lauren's brother and his wife go missing and someone needs to take care of their child. Per the stipulations in her brother's will, Mack and Lauren get married to take on the care of her niece. Although the events leading up to this are a little farfetched (I would think the welfare of the child should be considered more when allocating caretakers, as opposed to making sure they are a married couple, but oh well...), I like a good marriage of convenience story as much as the next person. I think what made this story more real is that both Mack and Lauren had some sort of initial attraction to each other, even if it was hidden from the other.

I liked how the author developed the relationship between Mack and Lauren. They definitely could have had better communication, but that made the story more interesting. I kept waiting for the point when the two would figure out and resolve their issues and become a real couple and family.

I'm going to be completely honest, some of the bedroom talk got to me. I just wasn't feeling some of the language and it took away from the story because it stuck with me throughout the book. I've read other novels by Shoshanna Evers and really liked them, so it disappointed me that I wasn't completely in love with The Tycoon's Convenient Bride..., but overall, this is a sweet, romantic story about two people who come together to raise a child and end up becoming a genuine family. If marriage of convenience books are your thing, I would definitely recommend this as a quick read. It's perfect for the beach or to have on hand during a long trip. 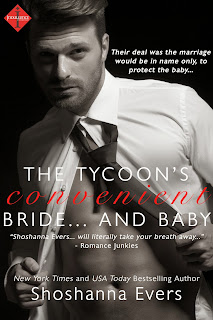 After her brother and his wife go missing and are presumed dead, Lauren Peters plans to raise their infant daughter. Her brother's will, however, stipulates that baby Callie can only be raised by a married couple. Lauren’s as single as they come.

Mack Hansen can’t stand idly by while his business partner’s baby is thrown into a foster home. As he sees it, there’s only one solution "he and Lauren will marry for the sake of the baby“and he’ll keep his attraction to her at bay.

Lauren knows that Mack is all about business, including their marriage of convenience. But her unexpected feelings for him have her turned upside down. With passion sizzling between them, can Mack keep Lauren from stealing his heart…and becoming his wife for real?


Check out the rest of the reviews for the release day tour by clicking HERE.