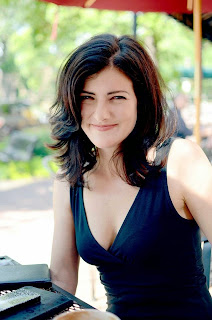 Kristi Belcamino is a writer, photographer, and artist. In her former life as a newspaper crime reporter in California, she flew over Big Sur in an F/A-18 jet with the Blue Angels, raced a Dodge Viper at Laguna Seca, watched autopsies, and interviewed serial killers. She is now a journalist based in Minneapolis, and the Gabriella Giovanni mysteries are her first books. Find Kristi on Facebook or on Twitter.

I Am Not Gabriella

One thing that has surprised me about being published is that people seem to have a hard time separating me from my main character.

There are a few similarities:

I mean, yeah sure I'm Italian-American, brunette, and a former crime reporter, but really that's about it. But unlike my character, I’ve been with my husband for 24 years, life in Minneapolis, and have two kids. And that is just the tip of the iceberg for differences.

I write in first person present tense and I think this contributes to it.

But when people read my books and are completely immersed in Gabriella Giovanni's world - and frankly, in her head - they sometimes come away feeling like they know me intimately.

Well this is hard to swallow on many counts. I'm not my character. Thank goodness! My mom reads my books. My dad reads my books. I have violence. And sex scenes! If I were writing about myself, I'd die of embarrassment and never be able to write another word.

Gabriella Giovanni is a fictional character. Sure, she has some of me in her. But so does the serial killer and the cop and the little kid and the gangbanger on the corner. Every character has a tiny bit of me in him or her, after all, they came from my brain.

But I'm not my characters.

However, some people who read my books assume that I'm Gabriella.

In fact, one of my friends who read my book last summer was upset because Gabriella was sleeping around and I've been married 20 years.

"I'm not Gabriella," I told her, even though I really shouldn't have had to say that.

It is by far, the most common question I'm asked in an interview: “Are you Gabriella?”

So much so, that I made myself take the Myers-Brigg personality test twice. Once as me and once as Gabriella. It was no surprise to me that we were polar opposites in every way.

I’m not Gabriella, but I sure do like spending time in her world and from what I’ve heard, my readers do, as well! 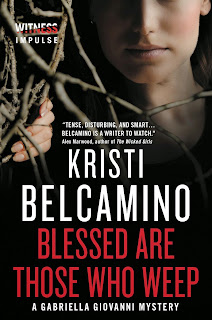 San Francisco Bay Area reporter Gabriella Giovanni stumbles onto a horrific crime scene with only one survivor—a baby girl found crawling between the dead bodies of her family members. Reeling from the slaughter, Gabriella clings to the infant. When Social Services pries the little girl from her arms, the enormity of the tragedy hits home. Diving deep into a case that brings her buried past to the forefront, Gabriella is determined to hunt down the killer who left this helpless baby an orphan.

But one by one the clues all lead to a dead end, and Gabriella's obsession with finding justice pulls her into a dark, tortuous spiral that is set to destroy everything she loves …


“Tense, disturbing and smart....Belcamino is a writer to watch.” — Alex Marwood, author of The Wicked Girls

Check out the rest of the Gabriella Giovanni Mystery Series on Goodreads HERE.

Blessed Are Those Who Weep Blog Tour Arranged By Literati Author Services.