Beth Labonte was born in Salem, Massachusetts and received a B.A. in Sociology from the University of Massachusetts Amherst in 2001. Currently working as an Administrative Assistant, she has taken to writing as her creative outlet in an excruciatingly mundane corporate world. Beth resides outside of Worcester, Massachusetts with her husband, son, and two cats.

If you like a laugh out loud, funny, romantic story, then Summer At Sea is the book for you! I really liked reading about Summer and her quest to find a man, as well as her interactions with Graham and her parents, during the cruise. Her encounters with her parents (and their rampant hypochondria) never failed to draw a laugh from me. I won't spoil anything, but the night club scene is one of the funniest of the book and I could just imagine how mortified Summer was!

I loved the connection Graham, Summer's brother's best friend and cabin mate during the cruise, had with Summer's parents. He had a way with them, especially her mother, that seemed to calm them down and make them less crazy and frantic. I also loved the dynamic between Summer and Graham. His advice on how to handle her parents helps Summer out and I liked experiencing the development of their relationship from long time acquaintances to romance.

Summer At Sea is a humorous novel about a girl trying to find romance while living under the thumb of her very overprotective parents. It's a fun read, perfect for the summer, while relaxing on the beach or by the pool, or even in the winter, to chase the blues away. I couldn't stop laughing while reading and I highly recommend this hidden gem. I'm so glad I signed up for this tour because I doubt I would I read Summer At Sea otherwise and that would have been a shame. I'm happy I didn't miss out on reading such an enjoyable book! 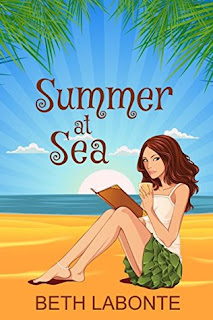 Four jackets of varying weights, enough socks for the entire Confederate Army, three umbrellas, most of the antacid aisle from the local pharmacy, and six pairs of old people sneakers that all look exactly the same.

Have you ever helped your parents pack for a weeklong cruise?

So begins vacation for Summer Hartwell - twenty-six years old, living with her anxiety-ridden parents, and unwillingly booked by her brother on a weeklong cruise to Bermuda. Despite the nightmare of being trapped aboard a cruise ship with Mom and Dad, Summer sees a rare opportunity to fulfill The Prophecy – her mother’s declaration that she will live at home until she gets married. With two thousand passengers onboard, at least one of them must be husband material, right?

The only problem is Graham Blenderman – her brother’s best friend who is joining them for the week, in all of his tall, blonde, extroverted glory. Graham doesn’t believe Summer needs a husband in order to break free from her parents. He thinks she just needs a little bit of nerve. And to Summer’s introverted horror, he’s willing to spend the entire week proving that he’s right.

Summer At Sea is available for FREE to Kindle Unlimited customers! Click HERE to borrow.