Wendy lives in the Chicago area. She has a Masters in Social Work and worked in the child welfare field for twelve years before she decided to pursue her dream of writing.

Between teaching college classes, trying to get her morbidly obese cat to slim down and tempering the will of her five-year-old granddaughter, who's determined to become a witch when she turns six so she can fly on her broom to see the Eiffel Tower and put hexes on people--not necessarily in that order--somehow Wendy still manages to fit in writing. She spends the remainder of her days inflicting mayhem on her hero and heroine until they beg for mercy.

My book, Bad to the Bone, is set in Key West. My heroine hates being there, not only because of the circumstances of her uncle’s arrest, but because she hates the heat and humidity. It got me thinking about settings for books and how sometimes they are an integral part of the story—like The Hunger Games or Divergent—where world building is involved. In those two titles there are places and situations the author has to describe in detail because they are foreign to us. We don’t have a frame of reference.

Often times the setting is secondary to the story and the main focus is on the characters. And sometimes there’s a combination of the two. When a story takes place in a small town the people are an important part of the setting. They bring color to the story. So even while they aren’t the sole focus, their interaction with the hero and heroine are typically an integral part of the story. Who’s the town busybody? Who’s the person in town who isn’t afraid to voice their opinion? Who’s the one who antagonizes the situation?

The setting in my story isn’t an integral piece, only an annoyance to Sammie. She hates the weather in Florida, but more than likely her dislike has more to do with the predicament her uncle is in and her frustration in her inability to solve it for him. Below is Sammie’s first meet with Enrique combined with the heat and humidity of Key West.

Sweat trickled down her back as the sun filtered through the windows. Wiping her brow, Sammie drew down a tap, filling another round for the men at the bar. Three ceiling fans, and the air-conditioning could not compete with the heat of the Florida sun and rocketing hormones raging inside her.

The gods of serendipity were knocking at her door, trying to tempt her. The devil on her shoulder tried to convince her how wonderful a walk on the wild side would be for her well-being—relieve stress, put a zing in her step, make her forget about her troubles. But the angel wagged her finger, then stomped her foot to ensure Sammie paid attention.

Now Sammie’s stuck in a situation that has little to do with Florida and more about her propensity for attracting men who are bad for her. Her last boyfriend ended up getting arresting for selling drugs and she didn’t wise up until the police came knocking on her door to see if she was involved as well. That’s been the story of her life. When she meets Enrique, she immediately jumps to the conclusion he’s just like all the rest.


I’ll be giving away several prizes during release week including: two hand-painted ‘Bad to the Bone’ wine glass, and three copies of my Entangled Indulgence Zodiac release, The Millionaire’s Deception. Enter rafflecopter to win. 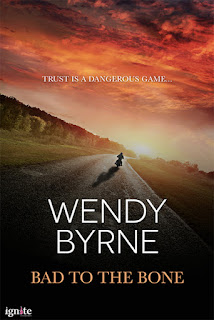 When her Uncle Jack is arrested on drug charges, Sammie Murphy hops the first plane to Key West. Being rescued isn’t on her uncle’s to-do list, though. When he admits guilt and instructs her to go home, Sammie knows with 100% certainty something is seriously wrong.

Veteran DEA agent Enrique Santos knows when a bust is solid. So why is he allowing Jack Murphy’s niece to mess with his head? He’s been set-up and nearly killed by a woman like her before, and he’s not about to make that mistake again.

But then things at Murphy’s bar take a turn for the dangerous, leaving Sammie entangled in Enrique’s dark past. Forced to second-guess his convictions, Enrique has no choice but to kidnap the one woman who could destroy everything...including his heart.

Bad To The Bone Blog Tour Arranged By GCR Promotions.