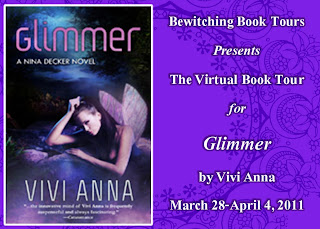 Series: Nina Decker
Source: Author via Bewitching Book Tours, no other compensation given for honest review

From Good Reads:
Although Nina Decker’s father is one hundred percent human, her mother is not. She belongs to an ancient and rare race of people called the fae. But these fae are not those written about in fairytales, with pretty gossamer wings and fairy dust, no they are sinister, malevolent and unkind, dwelling in another realm called Nightfall. More prone to destroy than to create. Abandoned at the age of ten, to be raised by her father, Nina has never forgiven her mother for that or for ruining her father. A man of only sixty, he appears to be closer to eighty with a frail body and mind. He’s been fae-struck and is slowly fading away to nothing. This is one of the reasons why Nina has never gotten too close to any one man. She doesn’t want to seal his fate like her father’s has been...

My Review:
GLIMMER was a surprising book in several ways. The beginning starts off with a fairly gruesome attack having taken place. The victim has been brought to the hospital where Nina Decker works, and the reader is immediately thrown into the dual world that Nina lives in. One where humans exist with werewolves, but don't know of the other danger -the fae- that also share their space. Nina is half-fae, and knows that they are far from the "fairies" described in books. They are dangerous, vicious creatures, who only wear the mask of humanity when they want to.

What surprised me was that I really expected an action-packed urban fantasy, in which the heroine tried to solve the question of who attacked the victim in the hospital. But, the war that is coming is far more than this isolated experience. Even though the attack is the catalyst for the beginning of the book, the real plot is the exploration of Nina and the way that she identifies herself. She is fae, and isn't. She fights half of herself because she doesn't want to become the creature that her mother is.

Even before I reached the end of the story, I knew that I would be left wanting more. Not just because of the page length, but also because Vivi Anna's words drew me in. She has a talent for darker paranormal, and her character, Nina Decker, was a interesting person to get to know. Though the book does leave the reader hanging in terms of Nina's story having just started, I didn't feel as if it was a cliffhanger, in the traditional sense. Nina went through a transformation, and the first part of her new life had left her changed.

Hopefully, any subsequent Nina Decker novels will pick up what was started in GLIMMER. I really enjoyed the attraction between Nina and Severin Saint Morgan, the face of the "out" werewolves. I really enjoyed the glimpses of Nina's father, a cautionary tale of what becomes of a human that is fae-struck. Though he struggles with lucidity when seen throughout the novel, I thought it was interesting to have an example of the darker side of having the fae among humanity. Mostly, I would just love to return to this world that Anna has created, and take another trip through the surreal with Nina Decker. 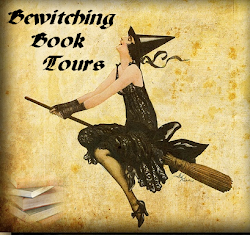