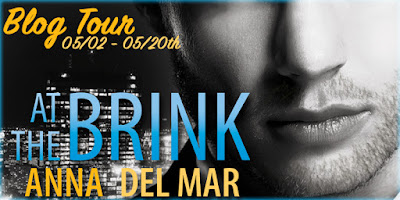 Anna del Mar writes hot, smart romances that soothe the soul, challenge the mind, and satisfy the heart. Her stories focus on strong heroines struggling to find their place in the world and the brave, sexy, kickass, military heroes who defy the limits of their broken bodies to protect the women they love. She is the author of The Asset (Carina Press), the first novel of her Wounded Warrior series and three other novels scheduled for release during 2016.

A Georgetown University graduate, Anna enjoys traveling, hiking, skiing, and the sea. Writing is her addiction, her drug of choice, and what she wants to do all the time. The extraordinary men and women she met during her years as a Navy wife inspire the fabulous heroes and heroines at the center of her stories. When she stays put—which doesn’t happen very often—she lives in Florida with her indulgent husband and two very opinionated cats.

Describe At the Brink in 140 characters or less.
Yikes! Hello there, Read My Mind. You like to put pressure on a writer, don’t you? Let’s see. How about:

He’s a decorated war hero and former SEAL.
She’s trapped in a dangerous situation.
And he’s made her an offer she can’t refuse.


What was the hardest scene for you to write in At the Brink? Why?
Three scenes come to mind, not because they were hard to write, but rather because I had a lot riding on them when I wrote them. I think I’ve told the story elsewhere. When I was “auditioning” for Carina Press, I got a request from the editors considering my At the Brink submission. Requests like these are not unusual at Carina, as they’ve built their reputation by carefully selecting their authors. The editors wanted to see three new scenes added to the original manuscript. I guess in the end they must have liked them, because here we are. ☺ Curious about those scenes? Three hints: One scene involves a custom “active sex” piece of furniture. Another scene has to do with bunk beds. Lots of bunk beds. The third scene is very artistic. It involves paint. Body paint.


If you could choose a theme song to best represent At The Brink, what song would you choose?
Stand by you, by Rachel Platten: https://youtu.be/bwB9EMpW8eY


Are you working on a writing project now? If so, can you share some details?
Sure! I’m currently working on two new novels and editing several of my upcoming titles. At the Brink marks my second release this year, coming on the heels of The Asset, book one of my Wounded Warrior series, a collection of romantic suspense novels about strong heroines struggling to find their place in the world and the brave, sexy, kickass, military heroes who challenge their limits to protect the women they love.

Right now, I’m putting the last touches on The Stranger, book two of the Wounded Warrior series, coming out in August. The Stranger is about Summer Silva, a warmth loving Miami architect who comes to Alaska chasing after her missing sister only to find herself stranded in the Alaskan wilderness and in danger from more than the elements. Only a mysterious, sexy stranger, an Alaskan scion and an ex-military pilot fighting his own demons who has no time for a lady in distress—let alone one who gets into trouble when she sleepwalks—can protect Summer from murder, treason and Alaska’s ruthless winter.

Thanks to the team at Harlequin and Carina Press, one lucky winner will receive the following:
$25 Amazon Gift Card
eCopy of At The Brink 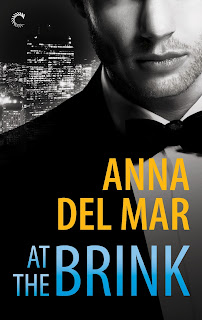 A Story of Sexual Obsession

Lily: I should never have agreed to it. A woman will do a lot to keep her husband happy. But when my husband sells me to the highest bidder—billionaire, former Navy SEAL, pride of Boston’s business scene—I agree, not to keep him happy but because it gives me the chance to finally escape. Escape my marriage, escape my debts, escape my life …

Josh Lane demands a steep price: my pride and my morals. But the truth is, I’ve never felt anything like what I feel for him. He brings color into my gray world. And his insistence that I submit to his commands—his depraved, filthy, amazing commands—only feeds my craving to be taken by him. Again. And again. I should never have agreed to it, but I’m so glad I did.

Josh: I don’t need to pay to keep women in my bed. Though my preferences may be unorthodox, I never leave a woman unsatisfied—far from it. Lily Boswell, though … her innocence draws me, her secrets intrigue me. Having her is worth dealing with her cowardly scum of a husband.

I want to release her passions and heal her wounds .On my terms. Because the blindfolds and restraints hide more than she could imagine. I must keep her safe from the people who would destroy me—and the demons that haunt my dreams.

At the Brink Blog Tour Arranged By Kismet Book Tours.