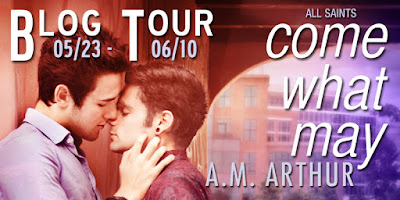 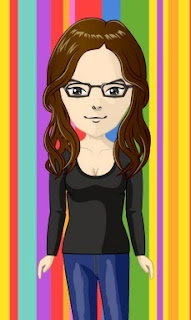 No stranger to the writing world, A.M. Arthur has been creating stories in her head since she was a child and scribbling them down nearly as long. She credits an early fascination with male friendships and "bromance" (and "The Young Riders") with her later discovery of and subsequent affair with m/m romance stories. When not writing, she can be found in her kitchen, pretending she's an amateur chef and trying to not poison herself or others with her cuisine experiments


What five words would you use to describe Come What May?
Hopeful, sexy, heartfelt, family, trust.


Was there a character in Come What May that was harder for you to write than the others? Why?
Jonas was a bit of a tricky character to write, because he can so easily come across as an ass (and my editor called me on this, too). He’s prickly at first, because he hates his current circumstances and is helpless to change them, but he also needed to be sympathetic. I had to find a balance between his sniping and his sensitive side, and he didn’t make it easy.


If you were creating a soundtrack for Come What May, what 2-5 songs would you want to include on it?
“Come What May” from Moulin Rouge!
“Bad Day” by Daniel Powter
“Proud” by Heather Small
“Born This Way,” by Lady Gaga


Why romance? What drew you to writing in this genre?
Hope. I love knowing that, no matter what circumstances the main couple is faced with, at the end of the day they will have their happy ending. Real life is so complicated, and we all don’t always find that one person who will love us, flaws and all, so the romance genre is a comfortable place to be when the waters of life get too freaking choppy.


How do you schedule writing time? Do you do a little every day, or have specific days each week that you write?
This past January, I was lucky enough to be able to cut back at my retail job and write full-time. It gives me a lot more freedom in how I structure my days/weeks now, and I still don’t have it down pat. But I do try to be in my home office and at my desk between 9-9:30 in the morning, break for lunch, and then work until around 4 or 5 pm. Since I still work 1 day a week at my retail job, I try to work at least 4 days in my home office, either writing or doing promotional stuff. That gives me two days off each week to spend as I like. It doesn’t always work out perfectly but I’m trying. It’s a work in progress.


Thanks to the team at Harlequin and Carina Press, one lucky winner will receive the following:
$25 Amazon Gift Card
eCopy of Come What May
Jelly Plaid Tote Bag
Signed poster by the author


Come What May (All Saints #1)
New Adult Contemporary LGBTQ Romance
Published: 23 May 2016 by Carina Press 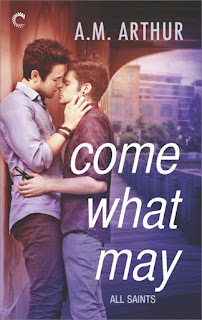 Jonas needs Tate. He just doesn't know it yet.

Or at least, he doesn't want to admit it. Because there is no way Jonas Ashcroft is gay. He's a straight, carefree frat boy player, just like any good son of a conservative state senator. If only his struggle to convince everyone—especially himself—didn't leave him so miserable. No matter how many girls or bottles he drowns himself in, Jonas can neither escape nor accept who he is.

Enter Tate. He's smart, confident, and instantly sees right through Jonas's surly exterior. Sure, he's done things in life he's not proud of, but he knows who he is and what he wants. And what he wants is Jonas. As their easy friendship intensifies into something more, Tate introduces Jonas to a life he's never known. One filled with acceptance and sex and a love that terrifies and excites them both.

But some inner demons refuse to be shaken off so easily. When Jonas's old life barges in, he faces a shattering choice, one that could destroy everything he and Tate have fought so hard for. Sometimes love just isn't enough—and sometimes it's exactly what you need.

Come What May (All Saints #1) Blog Tour Arranged By Kismet Book Tours.