A Flash of Fiction: Day Three (MAY)

Overview
As a child, Meghan Chase witnesses the disappearance of her father. He's there one day...and then gone the next. As traumatizing as that could be for a kid, she never imagines that it might happen again. But, a decade later it does. This time, it is her little brother who is the victim. Only this time, her eyes have been opened to another world.

Meghan now has to travel to the world of the Fae to take back her brother. While she is there, the danger isn't just from creatures that want blood and flesh more than anything on earth. There are also people who have human faces, but no humanity. And, Meghan discovers that she is one of them. Her father is the Summer Court king.

She'll have to journey through the courts of Faery to find where her brother has been hidden. Along the way, she'll be accompanied and protected by a Faery prince; Ash, the son of the Winter Court Queen, a woman who wants Meghan dead.

I Liked -- Plot: Meghan's travels take her through all of the courts of Faery, before she can land in the Iron Court, but my favorite part of the plot was that first part of the visit. In THE IRON KING, when her eyes are first opened to all of the creatures and beings in Faery, and when she realizes that her best friend belongs in this world, Julie Kagawa does such a good job at sharing Meghan's confusion and disbelief at what she sees. Then, also her growing horror at the world around her.

I Liked -- Character: I think that Ash was my favorite character, and not just because he was the bad boy, and the possible love interest for Meghan. I liked him because he was written as the best and worst of the Faery world. Kagawa doesn't write him as a person without pity. But, he is a product of his environment, and I think that Ash showed the dual face of all of the Fey characters. They are practical and sly, and beyond some of the human emotions that Meghan expects them to possess. 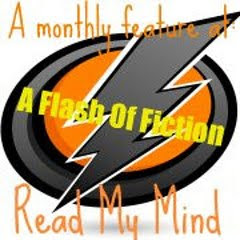 Email ThisBlogThis!Share to TwitterShare to FacebookShare to Pinterest
Labels: A Flash of Fiction, e-book, faery, fantasy, highly recommended, YA